AIFF signs MoU with LNIPE to set up Centre of Referees Excellence!

Press Release 2023-01-17 General Comments Off on AIFF signs MoU with LNIPE to set up Centre of Referees Excellence! 309 Views 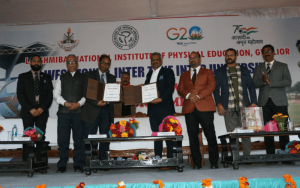 The All India Football Federation (AIFF) and Lakshmibai National Institute of Physical Education (LNIPE), Gwalior, have signed a Memorandum of Understanding (MoU) to establish the first Centre of Referees’ Excellence (CORE) in India at the LNIPE campus in Gwalior, Madhya Pradesh.

This is in line with the Strategic Roadmap announced by the AIFF as part of ‘Vision 2047′. As per the Roadmap, five COREs for referees’ development will be established across the country. The Gwalior centre is the first of its kind.

Apart from the CORE, the AIFF and the LNIPE have also entered into a research collaboration to study exercise physiology, biomechanical and psychological aspects of football.

The AIFF and LNIPE have agreed to initiate certain exchange programmes of personnel and students to promote the development of the game of football through joint studies, research, and training activities.

Speaking about the development, AIFF Secretary General Dr Shaji Prabhakaran, currently in Gwalior for the All-India Inter-University Women’s Football Final, said, “Refereeing development is an important aspect of ‘Vision 2047′ and this agreement is in line with the series of actions taken by the Federation to spread the game of football across the country in a modern and scientific manner. In the current scenario, the research and development wing of football makes the biggest contribution towards the growth of the game. The MoU we have signed with LNIPE, which has the required experience and expertise in this field, is a step towards taking Indian Football forward together.”

Professor Vivek Pandey, Officiating Vice-Chancellor LNIPE said, “We are happy to collaborate with the AIFF and extend our Institute’s support for the development of Indian Football. For the last many years, we have extended support to AIFF whenever the Federation sought our facility for various activities including holding youth national camps.”

He further stated, “This MoU is a win-win for both the Institutions, and by involving football research as part of this agreement, we can provide scientific support to the game.”