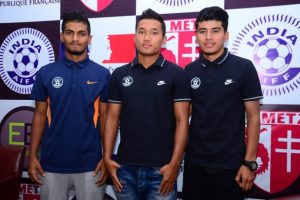 The All India Football Federation’s Technical Director Scott O’Donell visited French Ligue 1 club FC Metz to do the review of the five boys who have been training at the FC Metz Academy for the past five to six weeks. Mr. O’Donell spent significant time with the boys, their coaches and observing training sessions.

“Training and playing with and against quality players has certainly benefitted the boys. FC Metz Academy staff have made the players feel part of the Club. It is an excellent opportunity for our boys”, he added.

Denis Schaeffer, Director of the FC Metz Academy said that, “after a few weeks in Metz, the Indian players have progressed very satisfactorily. Their football level was a pleasant surprise to us.”

“It appears that their work at the AIFF Academies have developed the fundamental technique which allows them to adapt easily to our technical requirements and training sessions”, he added.

The boys have played a number of games with the FC Metz U-19 Academy Team and have impressed many. Scott O’Donell will again be visiting Metz in September 2016 just after the pre-season to review the further progress.