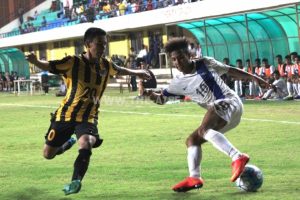 The Indian Under-16 National Team came back from two goals down to snatch a dramatic 2-2 draw against Malaysia in their opening match of the AIFF Youth Cup at Tilak Maidan in Vasco, Goa today, May 15.

Strikes by Muhammad Sallahuddin and skipper Arif Suhaimi in the 44th and the 79th minute respectively had helped Malaysia to a 2-0 lead inside 80 minutes. But a rampant attacking display in the last 10 minute of the match saw India equalize their deficit.

Komal Thatal pulled one back in the 82nd minute and then Boris Singh struck for the hosts in injury time (90+4) as both Teams shared points.

Although India created more goal scoring opportunities and prodded towards goal with every touch of the ball, it was their opponents who took the lead in the 44th minute – much against the run of play. Just a minute before halftime, a defensive lapse saw Muhammad Sallahuddin in the clear and he made the most of it curling his shot home.

Nevertheless, the Indian Colts should have taken the lead in the 31st minute when Ninthoi’s cross from the left flank, after breezing past his marking defender found Aniket in the Malaysian box. Aniket, surrounded by the Malaysian defence released a feeble shot as the opportunity went abegging.

Two minutes later, Aniket turned his marker inside out with a clever flick of the ball and burst onto goal only to shoot wide of the goal. The Indian colts gave the Malaysian defence a hard time as the lightning speed of Komal and Aniket often left the Malaysian back-four gasping.

Changing over, the Indians stretched the Malaysian defence while pinning them in their own half. In the 58th minute, live-wire Aniket Jadhav’s header came close to equalizing the deficit for India as his chance went whiskers over the opposition bar.

A minute later, Aniket was at it again, this time the lanky forward’s shot looped over the bar and landed atop the net as India pressed for the equalizer.

The Indian colts fostered plenty of chances and constantly hovered around the Malaysian box but were left reeling as the Colts failed to apply the finishing touches to their attacks.

The Indian colts were left reeling for the equalizer again in the 73rd minute when a cross from the right flank found an onrushing Sanjeev Stalin. In an attempt to hit the cross first time Stalin fluffed his shot as the ball flied inches past the post.

Shortly after Reamsochung’s cross found substitute Aman Chhetri in the box, but Chhetri who had come on for Aniket in the 63rd minute, failed to make clear contact.

The Indian momentum, however, was short-lived as Malaysia were awarded a penalty in the 79th minute and rival Captain Arif Suhami blasted the ball home to double their lead.

The drama started thereafter. The Indian colts reduced their deficit in the 82nd minute when Komal’s shot from outside of the box landed into the back of the Malaysian net to make the scoreline read 2-1.

Boris scored the equalizer in the extra time of the second half as he capitalized on a goalkeeping howler and slotted the ball home to make the full-time scoreline read 2-2 as India created a terrific comeback to edge out a draw in their opening match.