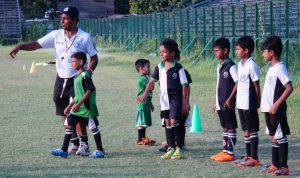 Over 100 kids from the Second Division League club’s youth development project participated in the Festival. Children aged between 4 to 12 were divided into teams and guided through a series of activity grids, with 4 vs 4, 5 vs 5 and 7 vs 7 matches, and also technical ability using fun-based drills.

To encourage the young talents, executive committee member Sharique Ahmed and newly appointed General Manager of Youth Development Hasnain Ahmed, alongside club captain Mumtaz Akhtar were present on the afternoon and also handed over trophies to the winning teams.