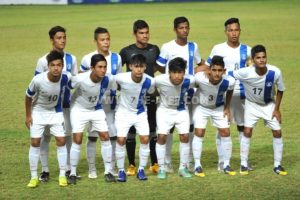 A “better” India despite all their possession and domination had to settle for a goalless draw against mighty South Korea in their last Group League match at the Tilak Maidan, Vasco on Monday, May 23.

Courtesy the draw, India finished on two points from four matches but it deprived them of their goal to qualify for the third place playoff. The result earned South Korea a summit clash with the USA in the Final on May 25 while Malaysia will lock horns with Tanzania in the third-place play-off the same day.

The statement, a draw against the mighty South Korea is a testimony of the manner the Indian U-16 World Cup Team is shaping up, first for the AFC U-16 Championship finals (September 2016) and the 2017 FIFA U-17 World Cup.

However, Coach Nicolai Adam admitted that the “goal” wasn’t achieved.

“We did not get that additional match (the third place play-off). Looking back, I feel we should have won that match against Malaysia,” he maintained.

“We need to work harder and smarter prior to the AFC U-16 Finals. I have always maintained that my Team is fit and the boys displayed to all that they are top fit. No one can say anything bad about today except the result.”

“The Tournament has been organised beautifully,” he certified.

The second half all belonged to India. There were a series of attacks, the one-twos and the switching keeping the Koreans guessing and making them frustrated.

The attacks gathered more pace with the inclusion of Aniket Yadav. Immediately after coming on, his sudden burst of speed caught the rival unaware but on both occasions his left-footer sailed over. The Indians stretched it to the flanks and there were numbers to fall back as much it was to counter attack.

Knowing that a draw will see them through to the Final, the Koreans weren’t much willing to go into the attack mode. Very often, the Indians were outnumbered in the box.

India’s last chance came in the last minute of the match but there was none to tap in Aimol’s low centre after he had cut in past his marker.

Earlier in the first half, South Korea on a couple of times they did try their luck from around 30 yards but Goalkeeper Nawaz had positioned himself perfectly on both occasions.

India’s best chance came in the 20th minute when Komal Thatal managed to win the battle over his marker to enter the box. But his placement ran across the face of the goal missing by a whisker.

In the 37th minute Ninthoi’s run down the right spit open the rival defence but as he entered the goal area he disbalanced himself and his weak shot was cleared without much haste.

In added time, Nawaz came up with the save of the Tournament denying South Korea with his reflexes as both Teams headed into the interval locked goalless.