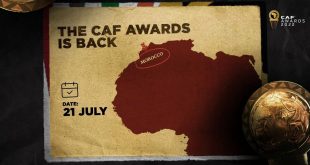 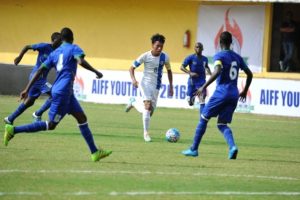 A “tired” India went down 1-3 to Tanzania in their second match of the AIFF Youth Cup at the Tilak Maidan in Vasco, Goa. Tanzania led 2-1 at half-time.

For Tanzania, Maziku Amani opened the scoring in the 20th minute off a diagonal right-footer which beat a diving Indian Goalkeeper Mohammad Nawaz Khan. Eight minutes later, Sarif Khan, in an effort to intercept Asad Ai’s cross deflected the ball into his own net. For India, Komal Thatal reduced the margin in the 36th minute, gleefully tapping it in the rebound after Tanzanian Goalkeeper Ramadhani had failed to gather it properly. However, Tanzania sealed it two minutes after resumption – Asad Ali curling in a free-kick from just outside the box.

“They were technically better than us. But we beat them for fitness. They looked tired and drained out after their 2-2 draw against Malaysia” he said

Indian Assistant Coach Eitebar Ibrahim said it was “bad day” for us. “We have trust in our boys. The opponents deserved to win. We were not at our best,” he maintained at the Official post match Press Conference as Nicolai Adam was ordered to leave the bench by the fourth Official.

“Our main focus stays the AFC U-16 Championship and the FIFA 2017 U-17 World Cup. Mistakes at this stage happen. The boys are learning,” he added.

Tanzania looked the better Team on the field. India did have their chances but in such a match unless one capitalizes, you pay for it. The cohesion which was evident all over against Malaysia seemed to be fizzling out as the game progressed. Moreover, the composure of the two rival Central Defenders frustrated India all throughout.

India were off the blocks faster. In the first minute itself, Komal hoodwinked his marker but his placement went wide. Some 10 minutes later, Boris cut in from the corner and placed it for Ninthoi. The latter’s shot all addressed to the net was tipped over but a stretched Ramadhani.

Nicolai brought in his first change as early as the 30th minute – Rakip replacing Aimol. He did utilize all the three within the next 28 minutes – Aman coming in for Sanjeev (53rd) and then Gaston replacing Ninthoi (58th).

For India, the easiest chance of the match fell in the 70th minute. Aman sneaked in between the two defenders and had Ramadhani at his mercy. But in an effort to finish off fast, he muffed it. Another half chance came in the 80th minute – but even as Ramadhani missed the flight of Gaston’s corner, Amarjit’s header went wide.

With India having staged a spectacular comeback against Malaysia in the last 10 minutes, everyone was hoping for another. But it all belonged to Tanzania. In fact, had their Strikers maintained calm, they could have scored a couple, or maybe even three more.

India next play United States of America in their next match on May 19 at 8pm.