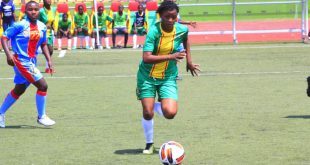 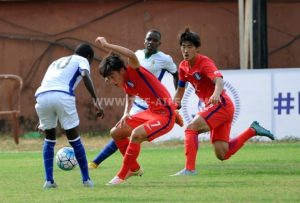 South Korea and Tanzania played a 2-2 draw in the AIFF Youth Cup at the Tilak Maidan in Goa earlier today. Courtesy the result, Tanzania, the leaders in the League table moved to 5 points from 3 matches while South Korea are on 4 points from 2 matches.

The first goal came in the 12th minute. Winger Asad Ali Juma went past a couple of defenders, stopped, and then went past another before unleashing a curler which hit the post and went in.

South Korea restored parity 15 minutes later. Captain Kim Taehwan’s kept his low cross behind the rival defence and it was tapped in by Striker Shin Sangwhi.

Changing over, South Korea surged ahead in the 58th minute, when an ice-cool Joung Sungjune converted from the spot.

But Tanzania were not to be deterred. They equalised in the 87th minute – substitute Maulid Lembe leaping higher than all to head in a corner.

South Korea next play United States of America on May 21 (4pm) while Tanzania face Malaysia the same day at 8pm.