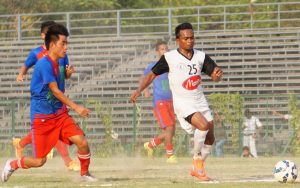 Gangtok Himalayan SC scored a 2-1 win over Mohammedan Sporting Club in a final round clash of the Second Division League on Thursday, May 19 at the Paljor Stadium in Gangtok.

Gangtok Himalayan SC took an early 4th minute lead through their Ivorian striker Zikahi Leonce Dodoz, only for Sheikh Faiaz to restore parity for Mohammedan Sporting in the 70th minute but the Ivorian struck again in the 74th minute to ensure full three point for his side.

Going into the match Mohammedan Sporting coach Subrata Bhattacharya Jr. made three changes to the team that drew against Dempo SC last week. While Sourav Chakraborty replaced Priyant Singh under the bar, Mumtaz Akhtar and Nagen Tamang came at the expense of Antoni Soren and Simbarashe Gate.

Gangtok Himalayan dominated the opening minutes of the game, and were rewarded with an early goal from Dodoz, who slotted past Sourav after receiving a delightful pass from Baichung Bhutia.

Having conceded early on, Mohammedan Sporting began attacking with intensity through their skipper Ajay Singh and Faiaz but Gangtok managed to hold on defending deep as the first half ended with the hosts leading 1-0.

Mohammedan Sporting kept on pressing in the second half in search of the equalizer and their efforts bore fruit in the 70th minute when Faiaz put the visitors on level terms scoring his first goal of the competition.

However, Dodoz had other ideas as just four minutes later against the run of play he once again put Gangtok Himalayan ahead. The Ivorian completed his brace after tapping in a low cross from the right side. The goal ultimately turned to be the match winner and put an end to Mohammedan Sporting’s six-match unbeaten run in the competition.

Following the result Mohammedan SC remain third in the table with 12 points from 9 games, while Gangtok Himalyan are fifth with 6 points from an equal number of matches.

Now Mohammedan Sporting will face NEROCA FC in Imphal in their last match of the season on May 29. Meanwhile, in between the Black Panthers will participate in the All India Kalinga Cup at Cuttack, Odisha.