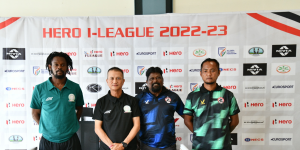 The hosts have suffered defeat in their last three meetings against TRAU FC across the last two seasons that took place inside the COVID bio-bubble. However, with the fans back in the stands and ready to get behind the People’s Club once more, Aizawl FC will look to put an end to the unwanted streak and pick up the three points.

Head coach Standly Rozario sounded upbeat ahead of his team’s opening clash and called upon the supporters to turn up in large numbers. He said, “We have a great team with a number of talented local Mizo players and quality foreigners. Our objective is to finish on top of the table and for that, a winning start tomorrow will go a long way. I hope to see the passion and love from the people of Aizawl and Mizoram in the stadium, and that will help us get the best result. We will not let them down.”

Defender and captain Lalchhawnkima echoed the head coach’s sentiments. He said, “The first match is always the hardest. As the coach said, the team’s confidence is high and we have a good advantage since we’ll be playing at our home where we train everyday. If we keep on playing the way we play, I believe we will bag the three points tomorrow.”

TRAU head coach L Nandakumar expressed the team’s excitement as the new season gets underway. He said, “We started pre-season training before the Durand Cup and the boys are very happy to play the first match tomorrow. Aizawl FC are a team we have played many times and it has always been a tough game. They possess a number of skillful players. It will be a challenging match for sure. Our target for the season is to be among the title contenders. With promotion to the ISL on the line, all the teams will be highly motivated and it will be a challenging fight for the top spot.”

Skipper and midfielder Gerard Williams said, “We are expecting a fast and physical game. Aizawl are the home team and they will look to play with confidence. We know that we will have to defend and play well to get a positive result. In the last couple of weeks, we have been training on artificial turf and are accustomed to it as well. After two seasons with empty stands, we are thankful that we can play in front of fans. It’s a great feeling.”

The match between the two sides from the North-East is scheduled to start at 4.30pm and will be broadcast live on Eurosport and Doordarshan Sports, and streamed live on the Discovery+ OTT platform.