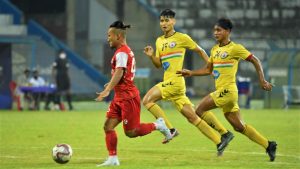 The Relegation Playoff of the I-League concluded with an enthralling win for Aizawl FC against Sudeva Delhi FC at the Kalyani Stadium. Sudeva Delhi took the lead and looked comfortable, however, Aizawl FC kept their calm, struck back, snatched all three points and finished at the top of the table. Sudeva Delhi finished the game with ten men after their skipper Vanlalzuidika Chhakchhuak was sent-off in the closing stages of the match.

Despite the match being a dead rubber, it was an encounter between two sides who wanted to finish at the top of the Relegation Playoff table. In the very first minute of the match, Sreyas VG got the ball right in front of goal but Aizawl FC keeper Lalmuansanga reached it first as Sreyas toppled over him. It did not take long for the referee to reach his pocket as Bakhtiyor Qalandarov earned himself a yellow card for a reckless challenge on Lawmnasangzuala.

Two minutes after having his name taken, Qalandarov popped up in the Sudeva half and curled in a beautiful cross from the left. It came to Lalremsanga, who was unmarked, but could not get his header on target. That turned out to be a huge let-off for Sudeva Delhi as the deadlock was broken minutes after that attack.

Youngster Shubho Paul was put clean through on goal with a defence-splitting pass from Basit Ahmed Bhat. The young striker adjusted his footing and put Sudeva ahead with a typical striker’s finish into the bottom left corner of goal. A minute after the goal, Sreyas came very close to doubling Sudeva’s advantage. However, this time the upright denied the men in yellow a goal.

Sudeva Delhi launched their third attack in as many minutes as Paul cut in from the left flank and curled a beautiful shot towards the top-right corner. The on-target effort was superbly put onto the crossbar by the fingertips of Lalmuansanga. After facing a series of Sudeva attacks, Aizawl FC finally managed to enter the attacking third midway through the first half.

Lalremsanga played a delightful cross in from the right. Dipanda Dicka was at the end of it. The Cameroonian put his header on target before Sachin Jha came up with an absolutely amazing save to deny Aizawl an equaliser.

A long diagonal was played into the Sudeva box as Veer Choudhary misjudged the flight of the ball and missed his header. The ball landed in the feet of Ayush Chhetri, who took a touch before slotting it past the keeper seconds before the half-time whistle.

In the second half, Sudeva Delhi substitute Akbar Khan was found by Paul on the right flank but Khan’s shot was wide. Sreyas and Paul were clicking well and wreaking havoc in the final third. Sreyas had another opportunity to score but was brilliantly denied by Thakima Ralte’s well-timed challenge

Right on the hour mark, Aizawl FC turned the game on its head. Luck was on their side as Lalremsanga’s delivery from the left picked up a deflection from Sairuatkima and struck the crossbar. On the rebound, Nishchal Chandan tried to clear it away from danger but ended up knocking the ball into the back of his own net, giving Aizawl FC a lead for the first time in the game.

A couple of minutes later, Shubho Paul went on another amazing run down the right before pulling it back for Sreyas who was right in front of the goal. The striker failed to place his shot well and struck one straight at the keeper as Aizawl FC escaped without a scrape. Shortly after the spurned opportunity, Sreyas was withdrawn and replaced by Abhijit Sarkar.

Sachin Jha had a decent game despite conceding. The Sudeva Delhi keeper denied Dipanda Dicka again in the second half before denying Vanlalnghenga’s powerful shot from close range.

Ten minutes from time, Lalliansanga Renthlei picked out Nischal Chandan but the defender’s effort went tantalisingly wide. A minute after that, Paul found himself in acres of space on the right side. However, the striker chose to shoot instead of squaring the ball in and ended up scuffing his effort.

Seven minutes from time, Aizawl FC substitute Lalliansanga came on and scored his side’s third, final and game-clinching goal after a through ball from Ramhlunchhunga. In the final minute of stoppage time, Sudeva Delhi skipper received his marching orders after a second yellow as Sudeva finished the game with ten men.

A come-back victory for Aizawl FC maintains their surreal alternate game winning streak and takes them to the top of the Relegation Playoff table, three points clear of TRAU in second. Sudeva Delhi emerged with no points and finished the season in fourth place, level on points with Indian Arrows.