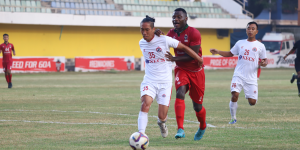 Churchill Brothers and Aizawl FC played out a battling 1-1 draw in the fifth-round fixture of the I-League 2022-23 at the Tilak Maidan in Vasco da Gama, Goa on Friday, December 2.

An early first-half goal by Churchill Brothers debutant Kamo Stephane Bayi was cancelled out by Henry Kisekka’s header in the second half as both teams shared the spoils after an intriguing 90 minutes.

Churchill Brothers made their intent clear right from the kick-off as they took the game to Aizawl FC. Even before the visitors could get settled, the hosts took the lead in the third minute. Lalawmpuia Sailo won a freekick in an attacking position after being fouled by Aizawl FC’s Eisuke Mohri. The young Churchill Brothers midfielder then sent a curling cross into the box for Ponif Vaz at the far post who headed the ball across for Kamo Stephane Bayi to tap into the open net and open the scoring.

Against the run of play, Churchill Brothers defender Momo Cisse lost the ball to Henry Kisekka in the 23rd minute. The Ugandan fed it to Dawngliana who took a powerful shot at goal but Churchill Brothers custodian Albino Gomes stood equal to it, saving the effort at the expense of a corner. The visitors started piling the pressure on the Churchill Brothers defence as they received four back-to-back corners but couldn’t take advantage of the set-piece situations. Defender Emmanuel Makinde went the closest as he hit the side netting in the fourth corner.

Near the half-hour mark, goalscorer Kamo Bayi skillfully dribbled past two Aizawl FC defenders before laying a pass for captain Kingslee Fernandes. Fernandes then shimmied past his marker to create the necessary space for himself to shoot, however, his effort was well-saved by Aizawl FC goalkeeper Vikram Singh.

In the 33rd minute, the Red Machines got another opportunity to double their lead as Lalkhawpuimawia entered the six-yard box following a through pass from Sailo. However, the Indian forward took too much time on the ball and Vikram closed him down before he could shoot.

Kisekka got a golden opportunity to equalise for the People’s Club at the stroke of half time. R Ramdinthara crossed the ball for Kisekka from the left flank but the Ugandan couldn’t make the most of it as his header went over the bar.

The game restarted with both teams determined to score the next goal. Ten minutes into the half, Churchill Brothers got the first major chance of the half as they caught Aizawl FC on the counter. Kamo Bayi received the ball in the opponent’s half and went one-on-one with Aizawl FC’s last defender Makinde before taking a curler from the edge of the box, which was acrobatically pushed away by goalkeeper Vikram.

Home captain Kingslee Fernandes, along with Sailo and Quan Gomes, constantly troubled the Aizawl FC defence with their skills and movement while on the defensive end, Raju Gaikwad was ever-present for Churchill Brothers to hinder Aizawl FC’s attack.

It turned into an end-to-end affair as the game approached the final whistle. Aizawl FC went up a gear looking for the equalising goal and finally succeeded in the 75th minute. A perfect left-footed cross from Zodingliana Ralte found Kisekka in the box and the Ugandan striker made no mistake as he headed the ball cleanly into the net.

Churchill Brothers head coach Antonio Rueda introduced the likes of Tana and Abdoulaye Sané in their bid to find the winner. It was all Churchill Brothers in the final minutes, however, the visitors went the closest. During the injury time, substitute Jeremy Laldinpuia grabbed onto a loose ball with his perfect touch before darting into the penalty area, but his left-footer was saved by Churchill Brothers goalkeeper Gomes in the last action of the game.

Following the result, Churchill Brothers stay at 11th place with two points with two draws from their first five games, while Aizawl FC move up to eighth position with five points from as many matches.