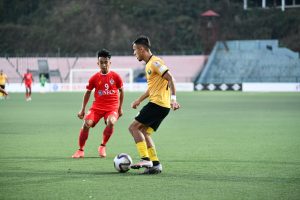 Aizawl FC and Real Kashmir FC’s defenders proved too strong and forwards too rusty as their clash at Rajiv Gandhi Stadium on Monday, January 9, ended in a goalless draw.

Subhasish Roy Chowdhury and Lalmuansanga, the two goalkeepers, stood tall in a match characterised by missed opportunities. The ball did find the net twice though, once for each side, but from offside positions. Aizawl FC’s Ugandan forward Henry Kisekka curled in a right-footer from the left through the far post but was ruled offside in the eighth minute. In the 28th minute, Real Kashmir FC’s Ghanaian forward Ibrahim Nurudeen suffered the same fate. Yakubu Wadudu sent in the cross from the right and Nurudeen headed it in, but he was clearly ahead of the last line of Aizawl FC defence.

One point from this match did not help either team but neither Aizawl FC coach Caetano Pinho, nor Real Kashmir coach Mehrajuddin Wadoo sounded too disappointed after the match. “The players gave everything they had. We were unlucky not to grab full points from this match,” said Mehraj. Pinho, on the other hand, remarked, “Football is a game of mistakes.” Having made defensive errors in their previous match, he was happy with the progress shown on the day and said finishing in attacking third will be worked on.

Even though the Aizawl FC coach said, “We had more clear cut chances than them”, the match would have ended in a heart-breaking loss for his side had Yakubu’s shot not hit the post in the 90th minute. He and Hero of the Match Nurudeen got into a scoring position many a time but a proper final touch eluded them.

Aizawl FC’s best chance to score came in the stoppage time of the first half, when young talent Tharpuia ran into the box from the right. He had enough space ahead to shoot himself but chose to pass it to Kisekka, who was right in the middle of the box. This unselfishness did not bear fruit as Kisekka could only provide a weak touch that deflected off a Real Kashmir defender and sailed over the bar. Winger Mafela had a good match, too, but only up to the penalty box. His shot at goal in the 49th minute was not powerful enough to beat Subhasish. Despite the Real Kashmir goalie’s doggedness, Yakubu’s free-kick had almost turned into an own goal in the 51st minute but Subhasish tipped it over the bar.

The only time Subhasish floundered was in the 76th minute, when Adinga’s powerful shot slipped out of his grasp, but Kisekka failed to provide the all-important touch once again.

Aizawl FC goalkeeper Muansanga maintained an adventurous approach in the game he left the goalline whenever the ball was floated into the box. He was successful in averting danger most of the time but landed in trouble soon after the breather when his weak fist fell to Nurudeen. Fortunately, the Ghanaian’s shot was blocked by a defender just in time.

This result keeps Real Kashmir FC in the fourth spot with 17 points in 10 matches, while Aizawl FC are seventh with 13 points from the same number of matches.