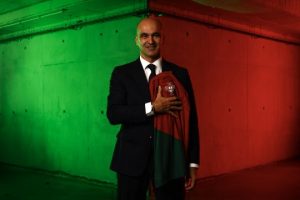 The president of the FPF, Fernando Gomes presented the new national coach Roberto Martínez highlighting his competence, but he also did not forget the work carried out by the previous coach Fernando Santos.

Fernando Gomes in his speech said, “In recent weeks, I defined the profile of the new coach, together with the members of the board who follow the A Selection, Humberto Coelho and João Pinto, and also with José Couceiro, vice-president and national technical director. The new national coach would have to be ambitious, knowledgeable about international football, used to training players at the highest level, with experience in the best championships and ideally also in national teams.”

“In the construction of this profile, the place of birth of the new coach of Portugal was never relevant. We are a selection made up of players who, for the most part, play, have played or will play in the coming years in different countries and championships.”

“Roberto Martinez’s path speaks for itself. He was born in Spain and as a player he developed in England.”

“As a coach, he has built a career based on the permanent acquisition of skills and work.”

Roberto Martínez Montoliu was a football player, but in February 2007 he accumulated the functions of coach at the service of Swansea City AFC, starting a new professional path that launched him on the road to success in charge of Wigan Athletic, Everton FC and the Belgium national team. He is now part of the Portuguese National Team.

As coach of Belgium, a position he took over in August 2016, he reached the best ranking ever in a FIFA World Cup when he finished third in 2018 in Russia, being, in fact, the highest scoring team in the tournament.

Belgium, during his tenure, was ranked number 1 in the FIFA ranking between October 25, 2018 and February 10, 2022. Martínez was the coach with the most appearances and most wins in charge of the Red Devils.