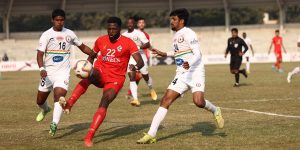 Aizawl FC clinched their first away win of the season with a 2-1 success away to bottom side Sudeva Delhi FC at the Chhatrasal Stadium in New Delhi on Monday, January 16.

Aizawl FC were looking comfortable with goals from Henry Kisekka and Lalchhanhima Sailo till the 86th minute. But Sudeva Delhi substitute Carlos Pao scored his second goal of the season to set up a pulsating finish.

It was one of Sudeva Delhi FC’s better performances of the season, but they had to come out empty-handed once again. They were the better side in the first half but fell apart after the breather as Ugandan striker Kisekka scored Aizawl FC’s first goal in the 53rd minute, calmly poking the ball past Sachin Jha in the home goal. Sailo added a second in the 70th minute with a brilliant curling strike into the top corner from the edge of the box. It was the teenager’s third goal of the season, and Tharpuia’s fifth assist. He is now the joint highest assist-provider with Sreenidi Deccan FC’s Rosenberg Gabriel.

Sudeva Delhi FC could count themselves unlucky as they hit the post and the crossbar once each and had 64 percent ball possession right through the match. However, coach Sankarlal Chakraborty was happy with how his wards played. “We are making progress,” he said in the post-match press conference. “But we’ll have to be more alert in the future. The result could have been different had two of our attempts not hit the post and the crossbar.”

Aizawl FC coach Caetanho Pinho reiterated the fact that a team would take Sudeva Delhi FC lightly at their own peril. “I knew it won’t be an easy game. They might be at the bottom of the table but they are always competitive.” He praised his players for showing great hunger and adaptability.

“We really needed this win and God has blessed us with this,” Pinho commented. “The hard work, determination and dedication of the boys is finally bearing fruit.”

He said Aizawl FC have huge potential and they can improve further. “I keep telling my boys that they can do great things and they are moving in right direction. I see them playing even better in the coming matches. However, it’ll take time. They have already improved a lot from where they were when I joined. But I’m not a magician,” he said.