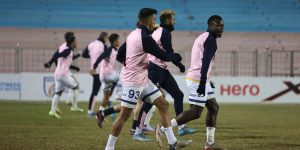 A rejuvenated Rajasthan United FC side will play host to eighth-place Churchill Brothers at the Ambedkar Stadium in New Delhi on Tuesday, January 17 at 7pm IST.

Things have changed much in the I-League since resumption in the New Year. Sreenidi Deccan FC, who had finished 2022 as table-toppers, have dropped to the second place after being defeated at home for the first time, and RoundGlass Punjab FC have grabbed the top spot. Rajasthan United had a role in this major change atop the table because they bottled up top-scorer David Castaneda and defeated the Deccan Warriors last Wednesday here at the Ambedkar Stadium. As a result of that win, the Desert Warriors are currently sixth on the table but can go up to third if they beat Churchill Brothers at the same venue here on Tuesday.

That would definitely act as extra motivation for the home team and Pushpender Kundu’s boys would have gained a lot of confidence from their performance in the last match. They were marginally ahead of Sreenidi Deccan in terms of ball possession and shots on target but could convert a half chance into a goal through defender Aidar Mambetaliev. Even the fact that they defeated Churchill Brothers in their own backyard in the first leg is a thing that could make the Goan side uneasy.

Kundu, however, played down that factor on the eve of the match. “There’s no point thinking about the two wins over them (one in a pre-season tournament) this season, because now they have a couple of new players and a new coach, who has come with a new philosophy. We are taking them seriously because they will definitely want to avenge those defeats. On the other hand, We would like to maintain our unbeaten streak at home (3 wins, 2 draws),” he said. 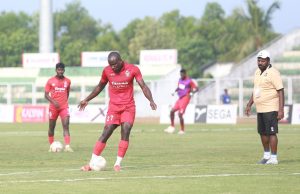 Churchill Brothers coach Fernando Santiago Varela cannot be blamed for being a worried man after his boys failed to grab full points against NEROCA FC in the last match. It was a home match where the opponents were reduced to ten men with more than 15 minutes to go for the final whistle. But from Senegalese Abdoulaye Sane to home boy Anil Gaonkar – everyone was guilty of wasting opportunities.

Varela will hope to see a better performance from his team as they embark on their second leg journey with only 13 points. On Monday, he said, “This is not an easy field to play on, but we will try to fine tune our strategy and earn three points.”

However, the coach refused to read too much into the first-leg defeat. “I was not in this role when Rajasthan (United) defeated us in the first leg, so this is a new opportunity for me,” he remarked. He also said it is an opportunity for the players to make amends and start the second leg of the I-League with a victory.

The match will be telecast live on Eurosport, DD Sports and Discovery Plus OTT platform from 7pm.