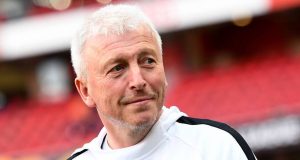 Bundesliga club Borussia Dortmund have reacted to Peter Hermann, 70, stepping down for health reasons by bringing Armin Reutershahn, 62, on board as the new assistant coach.

“Armin Reutershahn is a renowned and highly experienced football specialist who has worked alongside coaches like Julian Nagelsmann, Niko Kovac and Adi Hütter during his long career and has always striven for maximum success,” said Borussia Dortmund’s sporting director Sebastian Kehl, adding: “We’re convinced that Armin Reutershahn will enrich our coaching staff with his skills and experience, and will help us to achieve our objectives for the season.”

Reutershahn, who won the DFB-Pokal as Eintracht Frankfurt’s assistant coach in 2018, has initially signed a contract with BVB that will run until the end of the season.

“Borussia Dortmund are synonymous with football tradition and enormous enthusiasm. I’m really looking forward to BVB and working with head coach Edin Terzic, and I am sure that we’ll be speaking about a successful season come the end of the campaign,” said Reutershahn.

Reutershahn will commence his role when training resumes on 2 January 2023.