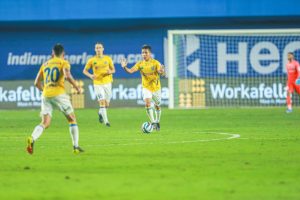 Indian Super League rivals Kerala Blasters and ATK Mohun Bagan have reached an agreement for the transfer of midfielder Puitea.

It was at DSK Shivajians FC that Puitea made his senior I-League debut before moving to NorthEast United FC, where he spend three seasons with a loan spell at Aizawl FC in the 2017/18 season.

Puitea joined Kerala Blasters in 2020, he needed some time to settle down and had an exceptional 2021/22 season for the Blasters as the team reached the ISL final. But this season, Puitea has only been used in patches and that has now resulted in a mid-season transfer to rivals ATK Mohun Bagan.

The Mariners get a quality Indian midfielder, who will strengthen their side.

The Club can confirm that it has reached an agreement with ATKMB for the transfer of Puitea for an undisclosed fee.

We wish Puitea all the best and thank him for the time he spent with us.

Puitea himself put together a heartbreaking message for the Kerala Blasters fans!