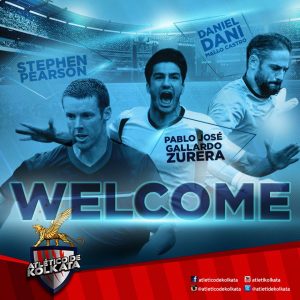 Atletico de Kolkata head coach Jose Molina said, “While developing the nucleus of the team this year the team management has rightly retained some seasoned performers and now invested on three exciting talents. We are slowly building the side with the right combinations, while Pearson had tasted success in ISL earlier it will be new turf for Dani and Pablo and I am sure their talent will be appreciated by the ATK fans.”

33 year old Lanark-born Stephen Paul Pearson returns for a second time to India to play in the ISL after his first stint with the Kerala Blasters in the inaugural 2014 season. Pearson started his career with FC Motherwell before spending time at Celtic Glasgow, Derby County, Stoke City, Bristol City, Kerala Blasters and a second stint at Motherwell.

On being allowed to leave before the end of his contract, Pearson said, “This (ATK) was something I was really keen to do and I want to thank everyone at Motherwell for the way they’ve handled this.”

30 year old Pablo José Gallardo Zurera is a central defender and joins ATK from Hongkong side Dreams Metro Gallery FC. The Seville-born Pablo Gallardo spend time with FC Sevilla, but never played for their first team before playing for other Spanish sides Recreativo de Huelva, Deportivo Alaves, CF Badalona, Burgos CF, Arroyo CP. In the 2014/15 season, he spend time with Sporting Clube de Goa, so he has some India experience which he can bring into ATK.

37 year old Daniel ‘Dani’ Mallo Castro is a seasoned goalkeeper. He was born in Cambre and started his career with Deportivo La Coruna, but after coming through their youth system, he was main a reserve keeper for the first team only making three first team La Liga experiences.

He spend time on loan at Elche CF before playing abroad for Sporting Braga (Portugal) and Falkirk (Scotland) before returning to Spain to play for Girona FC, CD Lugo and Albacete Balompie. Now he moves for the first time to Asia.