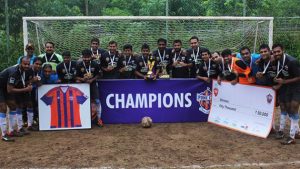 Rishi Pillay scored the opener in the 12th minute to give HDFC the lead. The second goal was scored by Leroy Almeida in the 24th minute while the third goal was scored in the 42nd minute by Sidharth Puthran which enabled HDFC Bank to walk home with the title.

FC Pune City CEO Gaurav Modwel said, “The first season of the FC Pune City Corporate Super Cup has got tremendous reception. Top corporates of Pune enthusiastically participated and we witnessed some cut throat competition and exciting football. I would like to thank all the participating teams and promise to be back with a bigger and better edition of Corporate Super Cup.”

In the meantime, our FC Pune City first team is getting ready for ISL-3 and hope to see everyone there.

Dilip Mittal, Director, Mittal Brothers said, “It is a real privilege to associate with a global brand like FC Pune City. This tournament has been a humongous success and we have been largely supported by the corporate factions of the city. We would look forward to the same support and enthusiasm next year.”