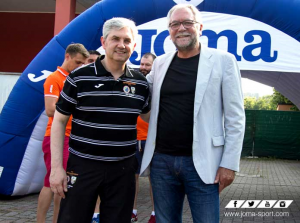 Spanish kitmaker Joma was the official sponsor of the International Futsal Coaches Clinic which took place between June 24 to 26 in the Italian city of Milan.

More than 125 coaches from the biggest futsal playing nations gathered in Italy for the IFCC’s second such clinic to hear some of the game of Futsal’s most respected coaches speak about the latest developments in Futsal.

And only in its second edition, the International Futsal Coaches Clinic was once more a huge success.

The International Futsal Coaches Clinic was the idea of Jose Venancio Lopez Hierro, the Spanish coach regarded as one of the best Futsal coaches in the world. He is pictured here with Mirko Annibale, director of Joma in Italy!