Bacuya the rhino bounds in as Official Mascot of 2023 FIFA U-20 World Cup – Indonesia! 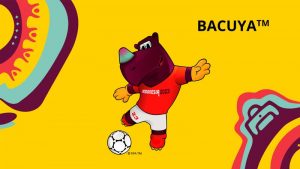 A Javanese rhinoceros called Bacuya enjoyed a thumping introduction to the public as the Official Mascot of the 2023 FIFA U-20 World Cup – Indonesia on Sunday on September 18, 2022.

Children and fans of all ages were able to catch a glimpse of Bacuya when he was unveiled at Jakarta’s iconic Selamat Datang (Welcome) Monument at 08:00 before embarking on a parade down Sudirman Street during the city’s Car-Free Day. The event was attended by FIFA’s Director of Tournaments, Jaime Yarza; the Indonesian Minister of Youth and Sports, Zainudin Amali; the President of the Football Association of Indonesia (PSSI), Mochamad Iriawan; and Local Organising Committee project lead Maaike Ira Puspita.

Over the coming months, the lovable rhino’s boundless energy will bring the fun and excitement of the FIFA U-20 World Cup™ to youngsters and fans across Indonesia and beyond.

With a multicoloured horn that glows when he plays football with others, Bacuya is ready to dazzle alongside a new generation of champions, with the tournament set to give football’s top young talents a platform to become future legends.

The FIFA U-20 World Cup will take place from May 20 to June 11, 2023, capturing the passion, colours, diversity and celebratory spirit of not just the competition, but also the locals and the host country itself, situated in the heart of Southeast Asia.

Speaking on the occasion of the launch, FIFA Director of Tournaments Jaime Yarza said: “The Official Mascot for the FIFA U-20 World Cup will engage a younger audience in a tournament that will provide solid foundations for the development of future stars of the game across the globe.

Bacuya will play an important role in encouraging children and families to come to the stadiums and see the world’s best young footballers compete for glory next year.”

PSSI President Mochamad Iriawan added: “We are proud to present Bacuya to football lovers around the world. Bacuya belongs to all, not only to Indonesia. Hosting the FIFA U-20 World Cup will have a huge impact on the growth of the game in Indonesia and Southeast Asia, and Bacuya will help to inspire a new generation of football enthusiasts.”

For her part, Local Organising Committee project lead Maaike Ira Puspita stated: “Bacuya represents the energy and enthusiasm that fans and players will experience in Indonesia when the highly anticipated tournament kicks off in just over eight months’ time.”

The tournament will take centre stage on FIFA+, where you can find the recent launch video .