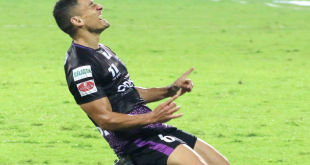 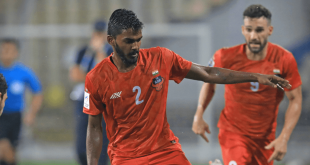 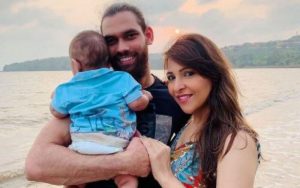 Sportspersons often have to sacrifice a lot, in order to maximise their performance on the pitch. Starting from culinary indulgences, to spending long stretches of time away from their loved ones – they often have to forego the simple pleasures of life.

For Blue Tigers defender Adil Khan, that sacrifice was immense, in the 2020-21 season of the ISL. While the league was being played from within a bio-bubble in Goa, Adil, became a father, when his wife gave birth to a baby boy.

“I had to remain in a bio-bubble in Goa for the league, but my wife was in Mumbai when she was pregnant, and she had to manage a lot of things by herself,” Adil said, speaking to the-aiff.com. “No matter what happens, we have a contract with our clubs, and we have to respect that.”

It was in February, when Adil’s club FC Goa was playing against Mumbai City FC, that Adil had received a message after the match that his wife had gone into labour, and that she was about to have a baby.

“I remember I was so excited and nervous at the same time. On the football pitch, I was just doing my duty, but this was something different,” he recalled. “We both had obviously wanted to be there when it happened, but I couldn’t. I remember I stayed up all night – I called everyone after the match – my parents, my in-laws, my friends. I was in constant touch with my wife and her doctor too. It was quite difficult to be stuck in a room in Goa when your wife is giving birth.”

“There’s always a level of anxiety involved in such situations. She would have been in so much pain – I can’t even imagine it. And with God’s grace, all went well and we were blessed with a baby boy. I can’t describe the feeling. I got on a video call as soon as it was possible, to see my son. I was sad that I couldn’t hold him in my arms, but I was really happy to see him at the same time. Can’t describe the emotion,” he said.

It was at this moment, that the Blue Tigers defender started planning ahead as well.

“This was the moment that I thought, I’d make him a number 9, if I can, in the future,” Adil said with a chuckle. “After Chhetri-bhai, I hope he can become a striker and break more records.”

While most footballers went back home after the end of the season, Adil only had a few days to meet his newly-born son in person, before he had to join the National Team camp in Dubai.

Even after returning from Dubai, the defender had to report to his club FC Goa for their AFC Champions League matches, which also took place in Goa. However, the family was allowed to be together inside the bubble, and Adil could finally spend some quality time with his son.

“Those months staying away from my family were difficult, especially when I knew my child was there. My wife was also very understanding during this time,” he averred.

“Thanks to technology, though, we could at least speak over video calls whenever I was free. I remember when I was younger, my father would also often go abroad, and he’d send letters, and we’d sometimes talk over the phone, but technology has changed all that.”

However, the one memory after the end of the ISL season that will cling to Adil’s memory forever, will be when he finally got to hold his son for the first time.

“It was such a happy moment for me. I had started crying because I finally got to see him for the first time,” recalled Adil. “I’ll remember that moment for as long as I am alive.”

Reflecting on becoming a father, Adil feels that things have changed for him now.

“When you are single, you worry only about yourself, and going around the country or the world, playing football seems fine. But once you become a father, things change. It sometimes becomes difficult to not be around, but we are trying to work our way through it,” informed Adil.

“Times like now, after returning from the National Team camp in the off-season become so precious. I am spending as much time as possible with my son now. I’m playing with him all the time,” he smiled.

For the tough-tackling defender, however, the approach to the game remains the same.“I try to keep my personal and professional lives separate. I still put in the same physical and mental preparation for every match, and my family also gives me that space, because they understand how things work. Things may have changed in my personal life, but I approach the game in the same manner. At the end of the day, whatever I do on the pitch, I do it for them,” said Adil.

As the world celebrates #FathersDay, Blue Tigers defender Adil Khan opens up about his emotions and experience of recently becoming a father for the first time, balancing his personal and professional lives, and his hopes from the newest member in his family.