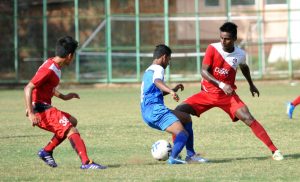 Both the teams displayed an attacking brand of football and had an equal number of scoring opportunities. As the match progressed, Dempo continued to exert pressure on the rivals and could have surged ahead through Hayden Fernandes’ well executed free-kick which was well blocked by Sayak Barai.

At the other end, DSK Shivajians played a smart game, putting pressure on the Dempo defence and further pressure through their wing backs who played a far more attacking line, while Rohit Kumar who marshalled the midfield and kept his forwards busy with flawless passing.

They came close in taking the lead in the 20th minute when Lalruat Puia’s snap shot was well blocked by Dempo goalkeeper Ozen Silva .

Midway in the opening session, Dempo pushed forward in search of a goal and their pressure nearly paid off when attacking midfielder Hayden Fernandes unleashed a volley which miss the target narrowly.

The pattern of the match was the same in the second half with Dempo doing most of the attacking with striker Kapil Hoble troubling the rival defense with well-orchestrated raids but DSK Shivajians defence comprising of Ameya Ranawad Sairvat Kina and Lalnunsiama were stubborn and never allowed their rival attackers to maneuver inside their territory.

Midway in the second session the visitors were a transformed side and worked to break the Dempo defence. They managed to create a flurry of attacks and nearly found the match winner when Jesse Ralte found K. Lalphathanga ideally placed and his snap shot was well blocked by Dempo goalkeeper Ozen Silva.

Thereafter the visitors did most of the attacking and Dempo were on the back foot, but Jesse Ralte try was well taken care off by the Dempo goalkeeper. Towards the end of the game DSK Shivajians went all out when rival defender Jayson D’Souza’s defensive lapse saw Jesse Ralte’s rasping shot was once more saved by keeper Ozen Silva.

But then substitute Osmiro Trinande scored the all-important winner in injury time for Dempo. A well-executed free-kick by Hayden Fernandes was beautifully connected by Osmiro Trinande in style keeping the rival goalkeeper Sayak Barai dazed and Dempo winning the match.