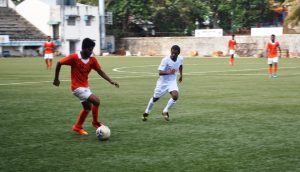 Sporting Clube de Goa Under-21s trounced Snows Football Academy – Raia 4-0 in a Group B match of the All India Bandodkar Gold Trophy Football Tournament played at the Duler Stadium in Mapusa on Sunday.

Sporting Goa’s Avrhishto Fernandes had the first good attempt at the goal in the 10th minute with a 25-yard strike which was collected by Snows FA keeper Beneston Barretto. Snows FA came with a fine built up move in the 14th minute through Carry Vaz and Desmond Pereira, but their attempt was stopped by Sporting Goa keeper Selwyn D’Souza before entering the danger zone.

At the other end Sporting Goa’s Nigerian Ndidi Chukwuma combined with Akeraj Martins, but failed to get past the Snows FA keeper. Snow FA’s best chance of taking the lead came in the 30th minute but Steve Fernandes shot hit a defender for a corner.

Just five minutes into the second session and Sporting Goa took the lead through Nigerian Ndidi Chukwuma who collected a cross from Harshad Naik hoodwinked stopper-back Brian Faria and slammed it into the goal.

In the 65th minute Daryl Costa who came from the bench drove a 25-yard stinging shot which crashed into the back of the Snows FA nylons. Daryl almost doubled the lead but his shot from close was blocked on the goalline by Snows FA defender Valito Miranda for a corner. Once again Daryl was unlucky as his strike off the corner hit the upright.

Sporting Goa substitute Moises D’Sa in the 70th minute stunned the defense and the rival keeper with a rasping strike from outside the penalty box for the third goal. Another Sporting Goa substitute Brandon Gomes made a solo run from the right flank and entering the danger zone finishing with a right footer to make it 4-0.

The Man of the match award of Rs. 5,000 was handed over to Quan Gomes of Sporting Goa by ZEST CEO Rahul Rodrigues.