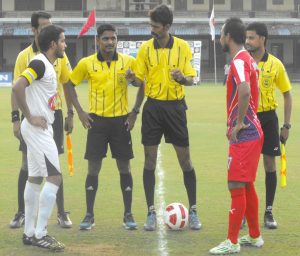 Kolkata giants Mohammedan Sporting Club defeated Border Security Force 4-1 in the quarterfinals on Sunday, May 22 to advance into the semifinals of the All India Kalinga Cup 2016 at Barabati Stadium in Cuttack.

Mohammedan Sporting started off aggressively and surged ahead within the first quarter of the game when James Moga scored off a Deepak Kumar pass in the 13th minute, only for Nilambram Sa to restore the parity for BSF in the 20th minute.

Mohammedan Sporting began the second-half from where they left off and eight minutes into the half they virtually took the game out of BSF’s reach after Pritam Singh found the back of the net with a brilliant solo run from the right side.

BSF, meanwhile, tried to go all out to keep their semifinal hopes alive but led by Lancine Toure and Rana Gharami, the Mohammedan Sporting defence did not give anything away.

Tonmoy Ghosh in the dying minutes capped the day with a clinical finish from Basanta Singh’s pass. The final scoreline read 4-1 in favour of the Black Panthers and now they would take on Army XI in the semifinals on Tuesday, May 24.