Bastian Schweinsteiger decides to stay another season with MLS side Chicago Fire!

Arunava Chaudhuri 2018-01-18 Americas Comments Off on Bastian Schweinsteiger decides to stay another season with MLS side Chicago Fire! 1,017 Views 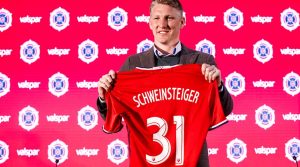 2014 FIFA World Cup winner Bastian Schweinsteiger has decided to extend his contract with Major League Soccer side Chicago Fire for the 2018 season with the German midfielder to be a Designated Player.

The 33-year-old made 24 MLS regular season appearances, scoring three goals and six assists, and one MLS Cup Playoffs appearance in 2017 for the Fire, the club he joined on March 21 from Manchester United last year.

Schweinsteiger helped revitalize the Chicago Fire last season, as they qualified for the post-season for the first time in five years and finished in third place in the Eastern Conference. Schweinsteiger was also an MLS All-Star in 2017 and captained the side vs. Real Madrid.

“I am very happy to re-sign with the Chicago Fire, and to continue what we started in 2017,” Schweinsteiger said in a club statement. “Last year was a special moment for my career, but it felt incomplete without a trophy. But I am sure we can create another memorable season with the support of our great fans. I love this city, this sport, and winning, so I look forward to another season with the Fire as we progress to hopefully another level of success.”

The 2014 FIFA World Cup winner, who amassed 121 caps for Germany, arrived in MLS in 2017 after 13 years at German Bundesliga powerhouse Bayern Munich and just under two seasons at legendary English Premier League side Manchester United.

The Chicago Fire open the 2018 MLS regular season on March 10 at home against Sporting Kansas City.