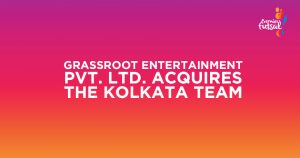 The agreement, for an undisclosed sum, makes Kolkata the second franchise to be sold after the promoters of football club Chennai City FC – among the oldest in the city – picked up the league’s Chennai team.

Grassroot Entertainment Pvt. Ltd., Director, Jeet said, “Football has a huge, fervent following in Kolkata, where love for the sport is passed on from one generation to the next. It is therefore a matter of great pride for me to introduce the faster, shorter version, of the beautiful game to Kolkatans.”

“Through Futsal, the young generation can hone their skills and talent, which will uplift their quality and eventually benefit in long-term development of footballers. I’m certain it will capture people’s imaginations and thrive, and I urge people to come forward and support our initiative to lead the Kolkata franchise of Premier Futsal to glory.”

The Kolkata franchise will be christened Kolkata 5s. In the inaugural season, each team will be similarly named. The franchise-owners will then be allowed to rebrand their respective teams from the second season onward.

Premier Futsal Managing Director, Dinesh Raj said, “It gives me immense pride to announce Jeet and Grassroot Entertainment Pvt. Ltd. as owners of our Kolkata franchise. We are delighted to have a superstar of Jeet’s stature backing Premier Futsal and playing his part to grow it in what is football’s Indian heartland. The response we have received from prospective owners across all cities validates our decision to get behind Futsal as sport. We will unveil owners of the other franchises very soon.”

Premier Futsal, which kicks off July 15, is a private and semi-professional league promoted by Xavier Britto of Indev Group. The league has signed some of the best futsallers in the world – spearheaded by the renowned Alessandro Rosa Vieira, fondly known as ‘Falcao’ – and has even enticed iconic footballers like Paul Scholes, Michel Salgado and Deco to compete.

Each franchise will be assigned a marquee international football player, seven international and five Indian futsallers for their squad to participate in the inaugural season through a player draft scheduled later this month.

Premier Futsal will be telecast live and exclusive on Sony SIX, SONY ESPN and Sony AATH. Matches will also be available to live stream on Sony LIV.