Bengaluru FC B cruise to 3-0 past MEG! 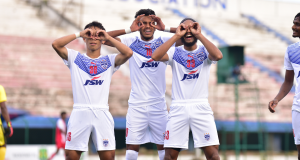 Bengaluru FC resumed their BDFA Super Division campaign in style as they ran away 3-0 winners against MEG, at the Bangalore Football Stadium, on Tuesday. Goals from Lalthangliana (32′) and Thoi (45′) saw the Blues enter the second half with a two goal cushion before Biswa sealed the points with a strike in the closing stages of the game.

Bengaluru began with Edwin Rossario and Biswa Darjee in midfield, while Robin Yadav and Harpreet Singh manned the backline. After a cagey opening half an hour, Thoi’s threaded ball into the final third found Lalthangliana, who carried it through on goal and slotted past MEG goalkeeper Pramod Joshi to give the Blue Colts the lead.

The hosts responded almost immediately, when Robin lost possession in a dangerous area and Lethaolen Khongsai had a shot from close quarters. However, Dipesh Chauhan’s quick reflexes were equal to it, as the Blue Colts’ custodian palmed away in the 36th minute.

Bengaluru were forced into a change when Bekey Oram had to be stretchered off after a collision with two MEG players, and the midfielder was replaced by Macarton Nickson.

MEG were reduced to ten men, when Joshi was handed his marching orders following an aerial challenge on Thoi Singh. MEG withdrew Mishal to bring on substitute ‘keeper Prashobh, whose first action was to save the resulting spot-kick. However, Thoi was allowed a second chance and slotted home on the retake, after MEG players were adjudged to have encroached the area initially.

After a slow start to the second half, Macarton almost found the back of the net just past the hour mark but Prashobh met the shot with a stunning save to deny the local boy. A second chance for Macarton came in the 69th minute, as he wriggled his way through the MEG backline but failed to hit the target. Macarton had a third chance to find the net only moments later, but sliced his shot wide after Jagdeep’s cross into the box.

With the Blue Colts controlling the proceedings, Biswa found the back of the net in the final minute of regulation time to seal the points.

The Blue Colts are back in action on December 2, when they face Bangalore Eagles at the same venue.