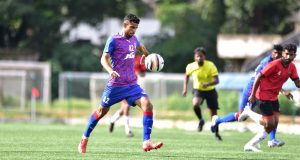 A late winner from Lalremtluanga Fanai was enough as Bengaluru FC edged 1-0 past Roots FC in a Zone ‘B’ encounter of the Puttaiah Memorial Cup at the Bangalore Football Stadium on Saturday. The victory is the Blue Colts’ second on the trot, having beaten Kodagu FC 5-0 in the opener early on in the week.

Earlier, Jan van Loon made one change to his side as Dipesh Chauhan replaced Sharon Padattil in goal. A first half that saw majority of the action in the middle of the park saw both sides struggling to create chances. Thoi Singh came closest to breaking the deadlock when he met a cross from Sudheer Kotikala, but the winger’s shot blazed over the bar.

Bengaluru FC had their best chance of the half just moments before the break when Robin Yadav’s shot from distance tested the Roots goalkeeper, but the shot was parried away to safety. Into the second period, Bengaluru came out firing and found the net within five minutes of the restart.

Akashdeep, found deep by Thoi, sent in a cross for the forward to run onto but the side-footed attempt was off-target. Only moments later, Thoi’s freekick was tipped over the bar. The Blue Colts continued to push forward and saw another big chance go begging when Akashdeep was found unmarked in the 18-yard-box by Felixson Fernandes, with the defender’s low cross met with power by the striker, but the effort was off target.

With five minutes left to play in regulation time, substitute Lalpekhlua made an instant impact off the bench, setting up Fanai with a deep cross. The winger, who skipped past his man, sent in an inch-perfect pass for the midfielder, who nodded it beyond the goalkeeper.

The Blue Colts face Kickstart FC next, on August 15 at the same venue.