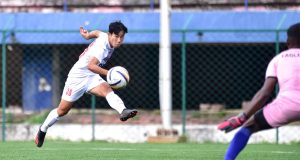 It was heartbreak at the Bangalore Football Stadium for the Blue Colts as they bowed out of the Puttaiah Memorial Cup with a shootout loss against Bangalore Eagles on Tuesday, August 17. Goalless at the end of regulation time, Jan van Loon’s side went down 2-4 on penalties.

Bengaluru FC started on the front foot, creating multiple chances through Damaitphang Lyngdoh, Thoi Singh and Sudheer Kotikala. The Blue Colts came close to finding the opener in the 13th minute when Kotikala was put through on goal by midfielder Bekey Oram, but his shot rolled wide off the post.

Minutes later, Kamalesh found Thoi Singh in the box, but the winger’s touch was too heavy and his shot was off-target. Bengaluru FC came close on multiple occasions but couldn’t find the finishing touch against a stubborn Eagles backline.

Into the second period, the Blue Colts sent on Monirul Molla and Amay Morajkar in place of Kamalesh Palanisamy and Lyngdoh, in an attempt to add more attacking impetus. Close to the hour mark, Lalpekhlua joined the fold. Bengaluru FC almost scored through an outrageous attempt when Monirul and Sudheer attempted overhead kicks at the same time, but the ball went over the crossbar.

In the 75th minute, Lalpekhlua ran down the wing and broke into the 18-yard-box before putting in a low cross for Morajkar, who connected well with the ball, but saw his effort go wide. With five minutes left on the clock, Fanai found Lalpekhlua with a defence-splitting pass. The striker took a touch and struck it goalward, but the ‘keeper was there to parry it away.

The referee blew the whistle for full-time with both teams failing to break the deadlock, signaling penalties to decide the winner. Fanai and Amay failed to score from the spot, while the Eagles scored all their attempts, consigning Bengaluru FC to a semifinal exit.

The Bangalore Eagles will face Kickstart FC in the final of the Puttaiah Memorial Cup.