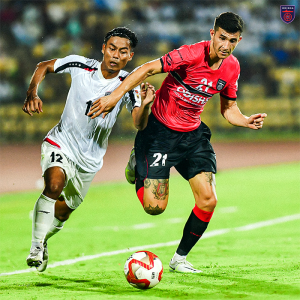 Odisha FC started their Durand Cup 2022 campaign with a resounding victory against NorthEast United FC. Odisha FC found the net thrice in each half to set the tone with an emphatic 6-0 win at Indira Gandhi Athletic Stadium in Guwahati.

Jerry and Nandhakumar were in red hot form, with the former dispatching a first-half brace. Nandhakumar curled a beautiful right-footed shot in from the edge of the box to give Odisha FC a comfortable 3-0 at the break. The players started the second half where they left off with goals from Isak, Diego and Thoiba.

The entire team looked in sync from front to back, with solid defending and high work rates in the middle of the park to keep a clean sheet. Captain Carlos Delgado marshalled the backline and compatriot Pedro Martin will be looking to get on the scoresheet after a positive performance today.

“It’s amazing to play with the fans after two years. It’s good to be back with them,” said Jerry. “It was a good result for the first game.” Jerry hopes the team carries this performance into the next game and the rest of the season and had a message for the Odisha FC fans.

“We hope to see the Kalinga Warriors support us from home and in the stadiums,” said Jerry. “We hope to do our best and give our best.”

Josep Gombau will be delighted after a statement performance in the Durand Cup, where the Club will face Kerala Blasters at 3pm IST on Tuesday, August 23. You can watch the match on Sports18 1, Sports 18 1HD and Sports18 Khel for Hindi commentary. Live streaming of the Durand Cup 2022 will also be available on VOOT and JioTV.