Bengaluru FC coach Westwood: We are concentrating on getting the job done!

Arunava Chaudhuri 2016-04-16 I-League Comments Off on Bengaluru FC coach Westwood: We are concentrating on getting the job done! 1,342 Views 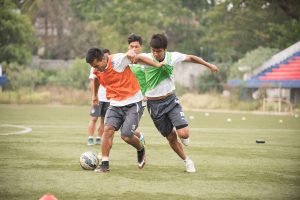 Even while everyone around is tipping Bengaluru FC for a second I-League crown in three years, Ashley Westwood refused to be drawn into any talk of glory as his side take on Salgaocar FC at the Sree Kanteerava Stadium on Sunday, needing a win to claim the title they won in their debut season.

“It’s just another game of football and I haven’t laid any expectations down to the boys. We know what we need to do. The League is for us to win now and I hope we get the right result,” said Westwood while addressing the press on the eve of the game.

The title has been reduced to a two-horse race after East Bengal played out a 0-0 draw with Sporting Clube de Goa on Friday. Bengaluru, meanwhile need a minimum of two points from two games to wrap things up. The Blues play second-placed Mohun Bagan in the season’s final game in Siliguri on Saturday but could render the game meaningless should they beat Salgaocar at the Fortress.

But despite playing down the much-awaited clash Westwood admitted the prospect of winning the title at home would be pleasing. “Obviously, we are at home and would like to win it there in front of our fans with a performance that they would be proud of. It adds that extra bit of spice. But again, we are not counting our chickens before they hatch.”

The club from Goa had a rather indifferent start to the League that saw Scottish coach Malcolm Thompson getting the sack and Santosh Kashyap take over. And after spending most of the season battling relegation, Salgaocar managed a ticket to safety after beating Aizawl last week.

Kashyap, however, will be without a few players, striker Darryl Duffy (suspension) being the biggest miss on the list that includes Calvin Mbarga and Gurjinder Singh (both injuries).

Westwood has a headache of a different kind – a completely fit and available squad to choose from. “Everyone’s fit. Everyone wants to get involved. That’s a nice selection problem for me. Will try and pick up the best team. Everyone’s chomping at the bit and that’s always a good thing.”

The Bengaluru attack has been in blistering form scoring eight goals in their last two games that included a structured 3-1 dismantling of East Bengal. The return of Eugeneson Lyngdoh too has played its part in the Blues’ resurgence and the No.14 said the dressing room was hungrier than ever for the title. “Last year we slipped at the last moment. We have another chance now. Tomorrow we have to go all out. We need to go and script our own history. We were gutted last year after losing. We are hungrier this year. We are looking forward to it and we will go all out.”