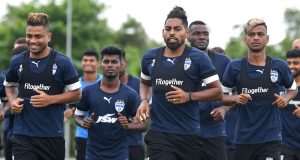 Bengaluru FC, having won their first game under Simon Grayson with a 2-1 result against Jamshedpur FC, continue their 2022 Durand Cup campaign with a clash against services side Indian Air Force FT at the Kishore Bharati Krirangan on Tuesday. Defender Hira Mondal is suspended, following a red card he picked up in the opening encounter for a second bookable offense.

“We watched the Indian Air Force Team in their last match against FC Goa and what we saw was a very physical encounter. We’re expecting a tough match, but our focus is completely on ourselves and how we can improve as a unit while the tournament progresses,” said Grayson.

Goals from Roy Krishna and Sunil Chhetri gave the Blues their first three points of the Durand Cup campaign, with Bengaluru FC grouped alongside IAF, Jamshedpur FC, Mohammedan Sporting and FC Goa. Grayson stressed that he was keen to give his players as many minutes as possible, with the focus set on the Indian Super League season.

“Our focus is also on giving these players game time and finding a balance that will allow each of them to get as fit as possible ahead of the new season. Unfortunately, we’ve picked up a few niggles and I’m not prepared to risk players for the short term. We’ve got an exciting squad with young and experienced players who have been in the ISL for a number of years. They compliment and push each other and I’m happy with the squad that I have at my disposal,” Grayson added.

Indian Air Force FT went down 0-1 to FC Goa in their opening encounter, and find themselves in fourth place in Group A. Mohammedan Sporting following their 3-0 win over Jamshedpur FC, are currently on top of the pile with six points from two games.

Kick-off at the Kishore Bharati Krirangan is set for 6pm, and will be telecast live on the Sports18 network, with live streaming on VOOT Select and Jio TV.