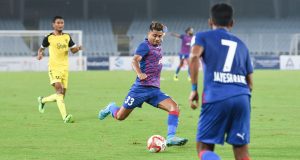 A resolute, gritty performance aided by an own-goal from Hyderabad FC’s Odei Onaindia (30′) sent Bengaluru FC through to their first-ever Durand Cup final with a 1-0 win, at the Saltlake Stadium in Kolkata on Thursday. Simon Grayson’s Blues will now face Mumbai City FC in the summit clash, set to take place at the same venue on Sunday, September 18.

Earlier, Grayson made one change to the Blues’ side that beat Odisha FC, as Jayesh Rane replaced Javi Hernandez. Manolo Marquez started with Joel Chianese in attack, with Nigerian striker Bartholomew Ogbeche playing behind him.

Hyderabad FC had the first chance of the game when Ogbeche found a pocket of space and got a shot away in the 8th minute, but Blues ‘keeper Gurpreet Singh Sandhu was equal to it. Moments later at the other end, Roy Krishna had a shot of his own that Anuj Kumar parried away to safety.

Bengaluru FC opened the scoring on the half-hour mark when Jayesh Rane drove forward in possession and found Prabir Das down the flank. The Blues’ full-back’s inch-perfect cross was met by Krishna, and then deflected into the back of the net by Hyderabad FC defender Onaindia.

Bengaluru FC took the lead into the break and Grayson rang in a change at the start of the second half as Namygal Bhutia replaced Rohit Kumar. Gurpreet was called into action soon after the restart when Ogbeche nodded a header on target but the Blues’ custodian pulled a save to keep his side in the lead.

The Blues made more changes just shy of the hour mark, as Danish Farooq and Udanta Singh replaced Rane and Naorem Roshan Singh. Bengaluru continued to push forward in attack but came up against a stubborn Hyderabad FC side. Marquez made changes of his own as Nim Dorjee Tamang and Borja Herrera came off to replace Mohammed Yasir and Onaindia.

Bengaluru FC were forced into a fourth change of the evening when Prabir was stretchered away, prompting Grayson to turn to Leon Augustine with just over ten minutes left to play. Herrera set up the visitors’ best chance of the second period when his lay-off found Ogbeche arriving and unmarked in the box, but the Nigerian’s shot in the 77th minute was off target.

Hyderabad FC made several forays into the final third and had their best chances from set-pieces but were denied by stubborn defending as Bengaluru FC’s trio of Sandesh Jhingan, Aleksandar Jovanovic and Parag Shrivas made their aerial prowess count to see out the win.