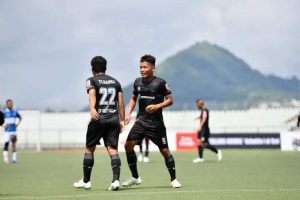 In a fantastic display of attacking football at Rajiv Gandhi Stadium, Chanmari FC took the lead on the 17th minute from a fine finish by Lalhriatpuia.

Lalhmunmawia added a second six minutes later to give his side a two goal cushion but FC Bethlehem were able to pull one back immediately when Isak Vanlalruatkima scored on the 25th minute.

The end to end action continued after the break and it was Chanmari FC who restored their two goal lead through an own goal from V Lalthlamuanpuia.

Lalnunzira scored from the spot in the 65th minute for FC Bethlehem to keep their opponents on their toes till the final whistle, but Chanmari FC were able to hold on for victory.