Bengaluru FC fire in 3-1 win over Odisha FC at the Fortress!

Press Release 2023-01-14 Indian Super League Comments Off on Bengaluru FC fire in 3-1 win over Odisha FC at the Fortress! 629 Views 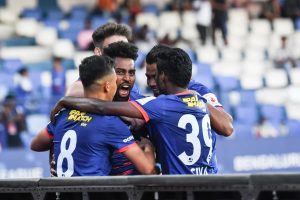 Two quickfire goals in the first half from Rohit Kumar and Roy Krishna and a late finish from Pablo Perez gave Bengaluru FC a crucial 3-1 win over Odisha FC at the Sree Kanteerava Stadium in Bengaluru on Saturday. The triumph also marked the first time that the Blues have won two games on the spin, as Simon Grayson’s men made sure they hadn’t lost sight and distance on a playoff spot.

Blues head coach Simon Grayson made one change to the side that started the previous game against NorthEast United as Sandesh Jhingan returned, replacing Aleksandar Jovanovic while young Sivasakthi Narayanan kept his place in the team.

A cagey opening saw both sides struggle to get a foothold on the game, but after a slow start, the Blues slowly found their bearings with some quick breakaways to beat the high line set by Odisha FC’s defence.

The Blues eventually scored the opener through Rohit Kumar in the 25th minute, with the midfielder turned in a lay-off from Alan Costa, with Carlos Delgado’s attempted clearance taking the ball past Amrinder Singh to make it 1-0 to Grayson’s men.

The Blues didn’t have to wait too long for a second when just three minutes after the opener, Krishna scored for the first time at the Kanteerava. Setting off with the ball on a counter, Sivasakthi turned in and played an inch-perfect pass through for Krishna, who slotted past Amrinder to double the lead.

Javi Hernandez – Bengaluru FC’s top scorer this season – had the chance to make it three when he ran straight through at goal from a little beyond the half-line. However, the Spaniard couldn’t pull off an attempted clip, with Amrinder making the save.

It would, however, take only five minutes into the restart for the visitors to reduce the deficit in half. Odisha FC striker Diego Mauricio won a penalty for Odisha FC after he was brought down in the box by Gurpreet. The Brazilian then stepped up to the spot and sent the Blues’ keeper the wrong way to bring Odisha FC back into the game.

Bengaluru FC’s first changes on the night were attacking ones, with Sunil Chhetri and Udanta Singh coming on for Parag Shrivas and Sivasakthi.

Having seen the lead halved, the Blues continued to push for another goal. It seemed like Grayson’s men had found their third goal of the game when Krishna found himself through on goal after being picked out by a flicked header from Chhetri. The Fijian lobbed the ball past Amrinder Singh into the net, but the linesman’s flag was up by then to deny Krishna his second of the game.

Simon Grayson made his second set of changes bringing on Danish Farooq and Spanish midfielder Pablo Perez for goalscorer Rohit Kumar and Javi Hernandez in the 85th minute. The Spaniard got himself on the scoresheet seven minutes later, as he finished off a wonderful counter-attacking move involving Krishna and Udanta, following an Odisha FC corner, to effectively put the game past the reach of Gombau’s men.

The victory moved Bengaluru FC onto 16 points, with Grayson’s men just three points off the final playoff spot. The Blues will travel to Jamshedpur to face the Men of Steel on Wednesday, January 18.