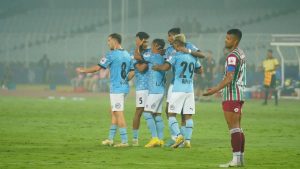 Mumbai City FC won 1-0 against ATK Mohun Bagan away from home thanks to a brilliant goal by Lallianzuala Chhangte in the first half. Despite a rigorous fightback by the Mariners in the second half the Islanders held onto their slender lead thanks to some amazing saves by Phurba and a resolute defence.

Des Buckingham made two changes to the starting eleven that won against Kerala Blasters FC at home. Rowlin Borges and Alberto Noguera came in for Apuia Ralte and Jorge Pereyra Diaz in the Islanders’ starting line-up. Phurba started in goal; Rostyn Griffiths partnered Mehtab Singh in central defence. Mehtab Singh was making his 50th appearance for the Islanders in this game against ATK Mohun Bagan. They were flanked by Rahul Bheke and Vignesh in the full-back positions. Rowlin Borges partnered the creative Alberto Noguera and the enigmatic Ahmed Jahouh in midfield. The Islanders had the prolific duo of Lallianzuala Chhangte on the right and Bipin Singh on the left wing in attack. Greg Stewart was leading the line for the Islanders against ATK Mohun Bagan.

The Islanders started the game swiftly as they settled into their passing game rhythm right form the first whistle. They carved out the first chance of the game in the 3rd minute. The Islanders won the ball very high up the pitch thanks to their intense pressing in the opening minutes of the game. After Chhangte nicked the ball off a ATK Mohun Bagan player and bore down on goal. He fired his shot away but was saved expertly by Vishal Kaith who denied Chhangte to open the Islanders’ account in this game.

Mumbai City FC carved out their next chance of the game in the 6th minute of the match. A smooth sequence of passes by the Islanders saw Greg carrying the ball and leading the counter attack. Chhangte who was running parallely to Greg on the right flank received the ball from the Scotsman in space and he broke into the box. He unleashed a powerful shot towards goal but was denied a goal by Kaith again who made another good save to make sure the scores stayed at 0-0.

The Mariners were finding it hard to get out of their half as the Islanders’ were successfully pressing them very high up the pitch. Mumbai City FC’s unrelenting pressure was making sure that chances were coming thick and fast for them.

In the 29th minute, the Islanders took the lead through Chhangte, as they scored the first goal of the game. Greg Stewart, who shifted to the right wing was found by a smart ball in acres of space. He played an accurate pass to Alberto Noguera who found himself on the edge of the box. He then squared the ball to Chhangte in the centre right outside the box. He unleashed a venomous shot that zipped past Vishal Kaith and nestled into the right bottom corner of the goal as the scores read 1-0 in favour of the Islanders.

The Islanders carved out another chance before the end of the first half in the 42nd minute of the game. Bipin received the ball on the left flank in space, he dribbled past the Mariners defender and broke into the box. He tried curling the ball into the top right corner from a tough angle but the ball went over the net.

Soon after that, the referee blew for half-time as the scores read 1-0 in favour of the Islanders. The Mariners were completely dominated in the first half as they were not able to carve out clear chances at goal in the entire half.

From the restart the Islanders started the second half in similar fashion as the first half. They were passing the ball expertly while ATK Mohun Bagan were struggling to get on the ball.

Des Buckingham made the first substitution of the game in the 46th minute of the game. He brought on Mandar Rao Dessai for Vignesh in the left-back position to manage the game. Mumbai City FC were dominating possession like usual and not allowing ATK Mohun Bagan to counter with ease.

Coach Buckingham made a double substitution in the 56th minute of the game. He brought on Vinit Rai and Mourtada Fall for Rowling Borges and Rostyn Griffiths respectively to reinforce things up defensively as the Islanders were trying to protect their slender 1-goal lead.

After Buckingham’s substitutions, the Mariners slowly grew into the game. In the 58th minute, they carved out their first clear chance of the game. Ashish Rai had made his way forward into the box and was found on the right side of the box by Petratos. He passed it to Boumous in space right in the centre of the box. The former Mumbai City FC player then unleashed a powerful first-time shot that Phurba acrobatically palmed away to make sure the scores stayed at 1-0 in favour of the Islanders.

ATK Mohun Bagan were finally able to get into the passing groove as they were chasing the Islanders’ 1-0 lead. In the 66th minute, they got another chance as Petratos whipped in an accurate corner towards Carl McHugh. He leaped the highest and got his head to the ball. McHugh perfectly directed his header towards the right top corner but was saved by the fingertip of Phurba who stretched to make sure the ball did not go into the net. The scores still read 1-0 in favour of the Islanders but now Phurba was being forced into action and making saves.

The Mariners were starting to dominate proceedings as the Mumbai City FC defence was being tested to the limit.

Buckingham made another substitution in the 74th minute of the game to further manage the game till end. He brought on Vikram Partap Singh for Alberto Noguera to make sure the Islanders could counter when the situation arose.

In the 77th minute, ATK Mohun Bagan got another chance to equalise. Petratos put in another dangerous corner that was missed by Lenny Rodrigues at the front post. Then the ball was flicked up in the air by Mehtab at the far post and landed at the feet of Boumous, who tried volleying the bouncing ball but failed to get an absolutely clean contact. His shot bounced off the ground and landed on top of the goal as the Mariners failed to capitalise. The scores still read 1-0 as ATK Mohun Bagan were desperately looking for that equaliser.

Juan Ferrando made a double substitution in the 80th minute of the game in the hopes of getting something out of the game. He brought on Federico Gallego and Kiyan Giri for Carl McHugh and Subhashish Bose respectively.

Federico Gallego had an almost instant impact as he saw Phurba off his line in the 83rd minute and tried his luck from way outside the box from the right side. Lachenpa showed his recovery pace as he back peddled to get back into a position to palm the ball over the crossbar to make sure the scores stayed at 1-0.

Mumbai City FC carved out the final chance of the game however in added time at the end of the second half. A long ball found Bipin Singh on the left side of the field who drove into the box and unleashed a powerful shot. Hamill had tracked Bipin’s run and was able to get the block to deny the Islanders their second goal of the game and keep ATK in the game.

Soon after the referee blew the final whistle and called the game to an end. The game ended 1-0 in favour of the Islanders who had secured their 11th win of the season.

Mumbai City FC will welcome NorthEast United FC to the Mumbai Football Arena on January 19 for their next game in the 2022/23 ISL season, the game will kick-off at 7.30pm IST.