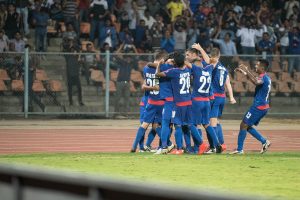 Arumainayagam, who was an integral part of the Indian National Team which won the Gold Medal in the Asian Games 1962, sounded euphoric on Bengaluru FC’s enviable feat.

“I have no words to express how I felt when the Referee blew the final whistle in the second semi-final. In the last three years, Bengaluru FC have established themselves as a Footballing powerhouse. Now they have gone one step above to send out a message to the entire Continent,” he told AIFF Media.

“It’s the first time an Indian Club have gone so far in any Continental tournament and I hope they will go all out to win the final frontier as well,” Arumainagayam wished the reigning I-League champions.

Former India Skipper Venkatesh Shanmugam, sounded ecstatic when AIFF Media caught up with him. “Incorporating a corporate Team in the I-League fraternity was a masterstroke by All India Football Federation,” he maintained. “Just look at the manner it has paid the dividends,” he stated.

“Bengaluru FC have shown to all as to how a Club needs to run. Right from building a Team to create a fan base, they have dug deep to create an outright professionally run Football Club. It’s a complete team game and right from the ball boys to the CEO of the Club, everyone is part of the system and very much aware of their respective responsibilities. That’s how the system should run, like a well-oiled machine,” he said in one breath.

“From my vantage point, I always rate a semifinal much tougher than a final.”

Narayanswami Ulaganathan, the prolific winger from Bengaluru also had a fair share of plaudits for Bengaluru FC for their success story.

“I’m really very proud of the fact that a Club from my City is going to represent our Nation in Asia — that too after overpowering the defending champions in the semi-final,” he maintained.

“But the mission is far from being accomplished. Expectations are surging up around them, but they have to keep calm to finish off the business in style,” he quipped.

Arumainayagam also lavished praise on Sunil Chhetri for his blinder against Joho Darul Ta’zim. “Time and again, Sunil Chhetri has proven his worth on the bigger stage. I feel really happy for him. He knows what he is capable of and I hope he delivers in the final.”

However, Venkatesh wasn’t willing to pick up out any single Player. “It’s a Team game and everyone is playing their part. Yeah, Sunil was brilliant but if you look back at the game, Eugeneson (Lyngdoh) was the silent operator. The defence line played their part too as did everyone. On the field, you need to support each other,” he pronounced.

“I’m pretty sure that the entire Country along with all the rival clubs will be cheering for them. They would be representing India.”