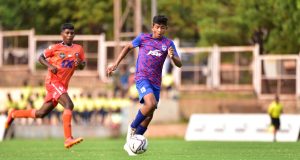 It didn’t take long for Bengaluru FC to start firing, with the Young Blues scoring in the seventh minute through Basudev CM. The forward picked up the ball inside the 18-yard-box and curled it beyond Frazer Fernandes in the Goa goal.

Ashik Adhikari made the difference on the wings and put in some fine crosses into the opponent’s box. The full-back found Sparsh in the area, who placed it into the far corner to double the lead on 22 minutes. Close to the end of the first-half, Bengaluru scored two more times through Lalpekhlua and Basudev.

Into the second half, Bengaluru put on a show and scored six more times, with Basudev and Lalpekhlua both grabbing hat-tricks by the 55th minute. Lalpekhlua sealed his ‘trick after running the length of the pitch before slotting it into the far corner to make it 8-0. Basudev went on to score five times, with his fifth goal off a diving header from Ashik’s cross.

Rajan Mani made multiple changes to close out the game and held onto possession till the final whistle. Bengaluru next face Reliance Foundation Young Champs on May 6 at the same venue.