Gokulam Kerala FC take on charged up ARA FC at the Kalinga Stadium!

Press Release 2022-05-04 Women Comments Off on Gokulam Kerala FC take on charged up ARA FC at the Kalinga Stadium! 123 Views 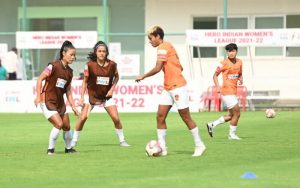 Fresh off victories in their previous Indian Women’s League 2022 fixtures, ARA FC and Gokulam Kerala FC meet at the Kalinga Stadium in Bhubaneswar on Thursday, May 5.

Preparations will be in full swing for ARA FC who will be taking on the challenge of the defending champions next. Before the match, Head Coach Prit Bhatt quoted, “Our girls are positive for the next game and will try to carry the winning momentum. Gokulam are on the top of the table, so it would be a great challenge for our team. But our team is well prepared for it.”

Speaking of his side’s start to the IWL season, Bhatt said, “Our team performance has increased match by match and the players are getting better in confidence. We will try to minimize our individual mistakes.”

Gokulam Kerala has been in splendid form so far, winning each of their five IWL opening fixtures. Ahead of facing ARA FC, Head Coach Anthony Andrews said, “ARA is a young side with few players who were part of the national team setup and they have been progressing every game. They have won their last game and will be confident. We want to go into the game with a positive mindset and stick to our plans.”

In addition, Andrews spoke about the side’s start to the season and the targets going forward. “So far, the team is doing good. We are working really hard to defend our title on and off the pitch and still have a few matches left in hand. We are focused and want to continue the same way. There are a few areas we need to work on. We will progress game by game and bring out our best.”