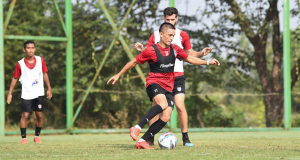 Marco Pezzaiuoli’s Bengaluru FC side will aim for nothing less than three points when they face off against Chennaiyin FC at the Tilak Maidan in Vasco on Thursday. The Blues have picked up just two points in their last two fixtures, with draws against ATK Mohun Bagan and Jamshedpur FC.

Pezzaiuoli had a lot of positives to take into the dressing room after his teams’ last outing against the Red Miners as Bengaluru FC picked up their first clean sheet of the season. Chennaiyin FC, meanwhile, tasted defeat for the second time this season in a 0-3 loss against Kerala Blasters in their most recent outing. Bozidar Bandovic’s Chennaiyin FC side have conceded only seven goals this campaign, and the Blues’ frontline will have their work cut out against what is the best defence in the League.

“The clean sheet was very important, because it gave us a bit of confidence. We now have to be patient through the 90 minutes and press the lines in midfield and attack, to create chances. We have to focus on ourselves and we want to have the ball back as soon as possible,” Pezzaiuoli said, speaking to the media on the eve of the game.

Pezzaiuoli also underlined the importance of being wary of the Chennaiyin FC attack, with the two sides having faced off twice in pre-season friendlies. “We played Chennaiyin in pre-season where they played a 4-4-2 and a 4-3-3. They are now playing in a 3-5-2 system, so it’s difficult to predict how they will set up. But we need to focus on ourselves.” Pezzaiuoli added.

Chennaiyin FC, who are currently sixth on the table with 11 points, are a win away from entering the top four but have picked up only one victory in their last five games. Bengaluru FC, on the other hand, will look to put an end to their seven-game winless streak.

The Blues will be buoyed by the return of Naorem Roshan Singh, with the full-back having served his one match suspension against Jamshedpur FC. Pezzaiuoli also provided an update on the fitness of key players. “Leon and Harmanpreet are still not available, and we have two more question marks in Udanta, who has a bit of soreness and King, who stepped out of training with a slight issue,” said Pezzaiuoli.

Kick-off between Bengaluru FC and Chennaiyin FC is at 7.30pm and will be telecast live on the STAR Sports Network, Disney+Hotstar and jioTV.