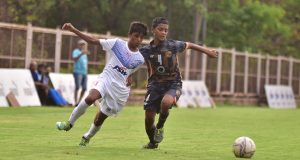 Bengaluru FC’s U-13 side split the points with RoundGlass Punjab FC in a 2-2 draw in the U-13 JSW Youth Cup in Bellary on Monday. Goals from Atul Pulipra (6′) and Miran Kaping (19′) gave the Young Blues a two-goal lead but a free-kick from Gunleiba Wangkheirakpam (27′) and an own-goal from Aalhaad Hate saw the Punjab side claw their way back to steal a point.

Bengaluru FC started the game with intent, and had RoundGlass Punjab FC on the ropes for long periods before Atul opened the scoring only six minutes in. The forward’s strike was too much for Nikbir Mazumdar, as the ball slipped through the arms of the Punjab custodian and rolled over the line.

The Young Blues came close only a few minutes later when Atul’s shot from distance rattled the crossbar and fell back into play. Bengaluru FC finally doubled their lead when Miran Kaping picked a through ball and dribbled past his marker, before a shot that left Mazumdar wrong-footed.

In the dying minutes of the first-half, RoundGlass Punjab FC won a free-kick right outside the 18-yard-box. Gunleiba stepped up and curled the ball into the top corner, beyond the reach of Dhruv Bafna in the Bengaluru FC goal, to reduce the deficit.

Into the second half, Bengaluru FC made changes as Ishan Chatur replaced Sehajvir Singh, and the striker had an instant impact. Chatur’s best chance came when his attempted effort from the edge of the box pulled a save from Mazumdar, who parried it away.

With seven minutes left to play, RoundGlass Punjab FC clawed their way back into the game, with Gunleiba involved again. The striker’s shot from distance took a heavy deflection off Aalhaad, and made its way past the reach of Bafna for 2-2.

Bengaluru FC pushed for a late winner, but it wasn’t to be. The point meant curtains for the Young Blue’s attempts to reach the final of the U-13 JSW Youth Cup. The Bengaluru FC U-13 boys next face FC Goa in the final game of the League Stage, on April 27 before another encounter between the sides in the third-place playoff on April 29.

Previous XtraTime VIDEO: Bengal prepare for Santosh Trophy semifinals!
Next Manchester City to return to the US for 2022/23 pre-season trip!