Manchester City to return to the US for 2022/23 pre-season trip! 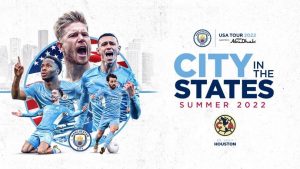 Manchester City will travel to the United States for two pre-season friendlies in preparation for the 2022/23 season. This will mark their first international friendly in over two calendar years due to COVID-19 restrictions.

Manchester City will meet Club América of the Mexican Liga BBVA MX for the first pre-season fixture at NRG Stadium on Wednesday, July 20, at 7:30pm CT. The second fixture of this U.S. preseason trip will be announced next week.

Tickets for the Club América match will go on sale to the public beginning on April 28.

Season ticket holders, Cityzens Members and Official Supporters Clubs members will be emailed their own exclusive pre-sale links to buy tickets before they go on public sale.

Television broadcast information will be announced at a later date.

This will mark Manchester City’s return to NRG Stadium after taking on Manchester United on July 20, 2017 in the first overseas Manchester derby.

“We are excited to return to the United States for this summer’s preseason trip, our first since before COVID-19. Our players and coaches cannot wait to play once again in-person in front of our American fans, who have shown us such great support and passion,” said Omar Berrada, Chief Football Operations Officer at City Football Group.

“Our first stop will be to Houston where we will take on Club América in our first preseason exhibition match. Houston is a city we are familiar with and have had the privilege to play at NRG Stadium before. Houston welcomed us with southern hospitality when we came for preseason in 2017 and we are really looking forward to returning to see our Texan fans.”

“We are thrilled at the opportunity to welcome these two iconic teams and their passionate fans back to Houston for one of this summer’s most exciting events,” said Greg Grissom, President of Lone Star Sports & Entertainment. “Manchester City and Club América are truly global brands. On July 20, the stage will be set at NRG Stadium for another exciting chapter in each club’s storied legacy.”

“Houston is the nation’s most diverse and inclusive city. We love sports and welcome fans worldwide to come and enjoy the electrifying atmosphere of great competition and sportsmanship,” said Mayor Sylvester Turner. “We are honoured to be the host city for the match between these two outstanding teams. The event is guaranteed to be huge for soccer fans and a big win for the City of Houston.”

“Facing a rival like Manchester City is always an exciting opportunity and we’re very thankful for the invitation,” said Santiago Baños, President of Club América. “The upcoming match on July 20 is an incredible chance for fans in the United Kingdom, United States and abroad to better get to know Mexican football, and of course this represents an amazing opportunity for the Americanistas to watch their favourite team play against an elite international opponent.”