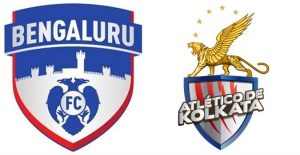 A Deshorn Brown strike in the first half (31′) gave Bengaluru FC a 1-0 win over ATK in the first leg of the Indian Super League semifinal at the Kanteerava Stadium in Bengaluru on Sunday. Carles Cuadrat’s side ended the game with ten men after defender Nishu Kumar was shown a red card in the second period, adjudged to have brought down Roy Krishna when the Fiji striker was through on goal.

The fixture was touted as a battle of tactics long before kick-off and both coaches sprung more than just a few surprises with the eleven that started the game. Carles Cuadrat chose to begin with five at the back, a midfield that comprised Erik Paartalu, Suresh Wangjam and Dimas Delgado, while Sunil Chhetri and Deshorn Brown paired up in attack. Udanta Singh and Ashique Kuruniyan, meanwhile, were options on the bench.

Habas too had a few surprise inclusions, starting with John Johnson, playing only his second game season, at the heart of defence, ahead of Victor Mongil. Midfielder Edu Garcia, whose appearances have mostly been restricted to from off the bench, too got a look in.

With both teams keeping things tight at the back, the game looked like it would need one of either a blunder or a moment of brilliance to break the deadlock. And fortunately for the Blues, it was ATK that blinked first. Receiving a cut-back from Paaratalu, Juanan Gonzalez hit a low and weak shot at Arindam Bhattacharya who spilled what looked like a simple take. Brown turned up and made the most of the gift with a stab home to give Bengaluru FC the lead in the 31st minute.

Cuadrat was forced to make a change at the restart after Albert Serran seemed to have strained his groin in the dying seconds of the first half. The Blues’ boss brought on Kevaughn Frater and the Jamaican wasted little time in linking up with Brown and Chhetri to cause the ATK defence all sorts of problems. One such move needed Bhattacharya to tip over a looping header that Chhetri looked to direct beyond the ‘keeper, as Bengaluru FC pressed for a second.

With fifteen minutes on the clock, Frater could have extended Benagluru’s lead when his rasping attempt with his left from twenty-five-yards out looked like flying into the net, only for Bhattacharya to get a hand to the hit and keep it out for a corner. Minutes later Chhetri squandered a chance from in the box when he skied Paartalu’s cut-back.

The Blues were dealt a telling blow late in the game when Nishu Kumar was shown a straight red when – in an attempt to halt a swift counter – brought down Roy Krishna on the edge of the box. Cuadrat then brought on Udanta for Wangjam as Bengaluru FC saw off a flurry of ATK attacks.

Bengaluru FC stayed compact at the back, as Udanta and Nili Perdomo manned the flanks, blocking every route ATK had through to goal. The Blues even had a chance to double their lead late in the game when Delgado found himself in space inside the box, but his shot was inches wide of the bar.

The Blues fly to Kolkata next, where the second leg of the semifinal, against ATK awaits them on March 8.