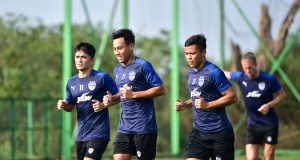 Interim Head Coach Naushad Moosa said his Bengaluru FC side is eager to build on the positives from previous fixtures when they take on Odisha FC at the Fatorda Stadium in Goa on Sunday. While Odisha FC have had it tough so far this season, stuck at the bottom and needing a win to stop their slide, the Blues haven’t been able to change their fortunes either, and are without a win in their last six fixtures.

“It’s true that Odisha are not in a great place right now but the same goes for us. All we have to do is maintain the positives from our previous game and build on that. It all depends on converting the opportunities we get, and how the midfielders cut down Odisha’s passes between the lines. We shouldn’t allow them to play their game, like we did against Kerala Blasters. If we maintain that, we will have a good chance on Sunday.”

Incidentally, Bengaluru FC’s previous win of the season came against Stuart Baxter’s Odisha FC side and Moosa maintains that his side are a positive bunch ahead of Sunday’s encounter. “Of course it was disappointing to lose to Kerala Blasters. But the next day the players and I watched the game and there were a lot of positives for us to take away. The way we played, kept the ball and stayed compact for the most part showed a very organised team. We have to build on our good work and move forward and my players are positive because they know we are getting better with each game.”

With games coming in fast and all teams around the Blues in the table having mixed results, Moosa believes that making the playoffs is not an unrealistic expectation this season. “Winning one game gets us three points and you go up the table because all the teams are very close. I don’t think the playoffs are impossible and it is just a matter of winning one game to get our confidence back and getting back into the groove. When that happens, the dynamic will change for us and we can build on it. Every game is important for us and we have to win as many of them as we can.”

The Blues will, yet again, miss defender Harmajot Khabra who is nursing a hamstring strain. The experienced player sat out of the game against Kerala Blasters too, and Moosa said he would be unavailable against Odisha FC. The visitors come into the game on the back of a 1-1 draw against Hyderabad FC, where a spirited second half saw Stuart Baxter’s men equalise and share points.

Kick off between Odisha FC and the Blues is scheduled for 7.30pm IST on Sunday, and will be telecast live on the STAR Sports Network, Hotstar and Jio TV.

Previous Mohammedan Sporting look to get back to winning ways against RG Punjab FC!
Next U-20 Africa Cup of Nations draw to be conducted next week Monday!

Relentless! Here’s how the skipper Sunil Chhetri made his way to a century of goals …