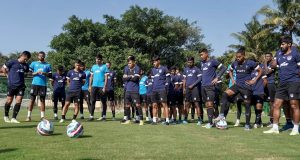 Bengaluru FC Head Coach Simon Grayson urged his side to return to winning ways, as they take on NorthEast United in their first fixture of 2023 at the Indira Gandhi Athletic Stadium in Guwahati on Friday. The Blues continue their travels after a 2-1 defeat to East Bengal FC in Kolkata last week. But, Grayson felt his side deserved something out of the game.

“My reflection of that game the other day was no different to what it was straight after. We’ve kept working despite that result, and have got to keep believing that we’re going in the right direction. The goal is there for us to try and achieve and we are not giving up on it,” Grayson mused, while addressing the media ahead of the game.

NorthEast United snapped their run of 10 consecutive defeats, winning their first game of the season against ATK Mohun Bagan on Christmas eve. However, Vincenzo Alberto Annese’s side then succumbed to a 6-1 defeat against defending champions Hyderabad FC.

“We’ve got to get back to winning ways as quickly as possible, and they (NorthEast) have got a new coach as well now. It’s never easy going to the Northeast in the first place. It’s a new challenge for us and I’m certain that it will be a tough fixture,” Grayson added.

The Blues find themselves in ninth place ahead of the encounter, and victory against the Highlanders would take them to 13 points. The two sides met earlier in the season, at the Sree Kanteerava Stadium, where Bengaluru FC won 1-0. Brazilian defender Alan Costa’s header proved to be the difference between the two sides.

“The results have not gone our way, but these players keep going till the very end. I see a lot of good things in training and matchday situations and if we put everything together, we can still go on a good run,” added the Englishman.

Colombian striker Wilmar Gil is the Highlanders’ top-scorer this season with three goals while Javi Hernandez leads the goalscoring charts for Bengaluru with four to his name. The Blues have seven wins in 13 encounters against NorthEast United in the Indian Super League, their most against any team.

“Until it’s mathematically impossible, we will keep going into every game trying to win it. Hopefully, we get a win that triggers an opportunity to get where we want to get to. The players will learn from this experience and come out of this tough period as better players, both physically and mentally. You have to suffer, as it makes you stronger for the future,” Grayson opined.

Kick-off between the Blues and NorthEast United FC is scheduled for 7.30 pm IST on Friday, and will be telecast live on the STAR Sports Network, Disney+Hotstar and JioTV.