Bengaluru FC’s Naushad Moosa: These boys are learning every day! 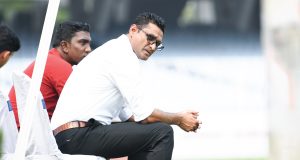 Written off by many for being a developmental team sans foreigners, Naushad Moosa has led his Bengaluru FC team to the semifinals of the 130th edition of the Durand Cup, a competition he knows more than most about. As a player, Moosa took part in 11 Durand Cup campaigns, winning it in 2001-02 with Mahindra United.

“This team is a work in progress, because their target is to make the Indian Super League squad and hopefully the National Team in the years to come. But that doesn’t mean the Durand Cup is any less of a competition. I keep telling the boys that they are privileged to have this opportunity. I know how teams brought the fight to Delhi in December just to take this cup home in my playing days,” said Moosa, fresh off his side’s 3-2 win over Army Green in the quarterfinal.

Bengaluru FC ended the group stage unbeaten, defeating Kerala Blasters and Indian Navy along the way. While the battles have been tougher each time, Moosa believes his young side has learned much along the way.

“When you look back, we’ve played four games and each game taught us different things. The win against Blasters was good for our confidence, drawing against Delhi at the Mohun Bagan Ground taught us the importance of coming together as a unit. The last two games against Indian Navy and Army Green have been about the importance of starting well,” he added.

Moosa, who stepped in as interim coach for the Blues in the business end of the Indian Super League last season, believes that while many of his younger players have the potential to play at the highest level, their industry in the coming years will prove whether they can make it or not.

“Being a coach on the sidelines of an Indian Super League game tells you how different things are. I’m really proud of this bunch because some of them have battled a lot of adversity to get to where they have. But I keep telling them that the battle isn’t won simply because they trained with the seniors or played a few games with them. You have to cement that spot before you can say you have achieved anything. And even then, they should know there will be others trying to take that spot from them.”

The Blues, who will face FC Goa for a spot in the final, have scored 12 goals in the competition through eight different goalscorers, but Moosa believes the game against the Gaurs will be the toughest one yet. “FC Goa have come with a squad that has played together for a long time, and it will be a good challenge for us. They have foreigners and good Indian players, and have consistently played well, so we will have to be at our best against them.”

While the games so far have been held behind closed doors, Moosa believes his side have not been far from the adulation of the Blues’ faithful back home. “I struggle to find words to explain what these fans do. Their support for the senior team is there for all to see, but even when I go to watch my son play his youth games they are there. At the U8, U10 and U12 level, we always have fans coming to watch the games and we’re feeling it here in Kolkata as well, even though they cannot be with us. We want to do well in this competition for them.”

The Blues take on FC Goa at the Saltlake Stadium in Kolkata on Wednesday, September 29 at 6 pm.