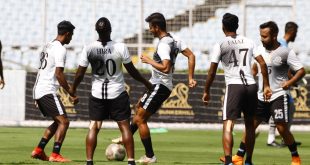 28 year old Manipur-born Boithang Haokip is a youth product of Shillong Lajong FC, where he also made his senior debut in 2009. He remained with them until 2016, while spending time on loan at ISL side NorthEast United FC.

In 2016, Boithang was signed by Mumbai City FC but got limited playing time before moving over to Bengaluru FC, where he spend the two seasons, winning the 2018 Super Cup and then the 2018/19 Indian Super League crown.

Haokip had one year to go on his contract with Bengaluru FC and therefore East Bengal had to pay an undisclosed transfer fee for his signing.

“I am feeling great to be part of QEBFC and one of the clubs that I had a dream to play since I have started my football career and also looking forward to do or give my best for the club and the fans,” Haokip said in the official club statement.

Carlos played a key role in the last season as part of Alejandro Menendez Garcia’s coaching staff and was instrumental in improving the fitness levels, positivity and tenacity of the entire squad.