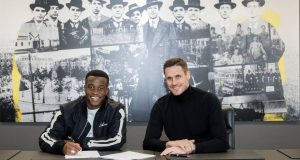 Borussia Dortmund and striker Youssoufa Moukoko have reached an agreement to continue working together until June 30, 2026. The 18-year-old has penned a new deal to that effect. Moukoko’s original contract would have expired this summer.

The forward, who came through the ranks in BVB’s youth set-up, has made his breakthrough in the senior squad this season with 12 goal involvements (six goals and six assists). Moukoko has already found the net 11 times in total in the Bundesliga. He is the youngest player to ever reach a double-digit goal tally in Germany’s top flight. A few days shy of his 18th birthday, he boarded the FIFA World Cup train and was part of the German national squad for the 2022 tournament in Qatar.

“Youssoufa is an extraordinary player whom we have developed ourselves and in whom we see huge potential for further development. I’m therefore happy that we have been able to convince Youssoufa before the start of what will be such an important second half-season for us that he has the best prospects at BVB and that his journey here is far from over. It was important for us to be able to complete the negotiations this week so that we all – and also Youssoufa in particular – could start the 2023 football year in peace and fully focused on the sporting challenges ahead,” said Borussia Dortmund’s sporting director Sebastian Kehl.

“It’s no secret that I feel comfortable at BVB. I have played in the youth teams, taken my first steps in professional football here and now I’m ready to take the next step in my development together with the club,” Moukoko said, continuing: “I sense the trust of the coaching staff and have an environment here in which I can develop perfectly,” he emphasised, adding: “I have of course been honoured by the interest from other clubs but ultimately it’s a decision from the heart. The fans have always supported me, and I want to give them and the club something back too.”