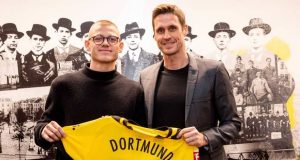 Defensive all-rounder Ryerson, who is one of the capital club’s most used players with 21 appearances in all competitions since the start of the season and is equally comfortable in both the left-back and right-back berth, today signed a contract with the eight-time German champions until June 30, 2026.

“We have big sporting challenges ahead of us which require defensive stability. Julian Ryerson is an intelligent player who – in a positive sense – defends very aggressively. We really like his profile, his character and his desire to leave the pitch on the winning side under all circumstances. In addition, he can be deployed on both the right and left of a back four and a back three, which gives him and us additional flexibility. We’re looking forward to having Julian and are happy that we have been able to execute this transfer at such short notice,” said Borussia Dortmund’s sporting director Sebastian Kehl.

Ryerson has made 79 Bundesliga appearances to date and made his debut for the Norwegian national team in November 2020 (15 caps in total). This morning, he successfully completed the obligatory medical check with his new employer.

“It is not easy for me to leave Union Berlin, because I owe a lot to this special club, my team-mates, the staff and the fans. I will always have fond memories of my time at the Alte Försterei,” said Julian Ryerson, adding: “I’m now looking forward to a new chapter with Borussia Dortmund and would like to help BVB to achieve their objectives in the Bundesliga, the Champions League and the DFB-Pokal. As an opposition player, I have already experienced the atmosphere at Signal Iduna Park – I was impressed and am now excited to see how it will feel to have the famous Yellow Wall behind me.”